Starkey and the Morlocks 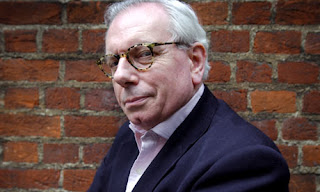 I recently watched a movie called Adulthood. I can’t tell you an awful lot about it other than it was set in London among an unprepossessing set of violent thugs and drug dealers. The reason I can’t describe what it was about is because I barely understood one word in ten. They were all speaking a language that I take to be a form of English, the argot of an underclass, referring to each other as bloods or buds or bluhs, I really can’t be sure which, the sort of gobbledegook that I suppose gives these types ‘street cred.’ It just so happens that I saw this a few days before the London riots. There they were again, the same types, all the same types, all the bloods or buds or bluhs.

When I say ‘all’ I mean black and white; I mean that white teenagers of a certain class have adopted aspects of what I take to be a type of black culture, specifically a kind of coded language, because it’s considered to be ‘cool’ or because they have never known anything else, growing up in places like Hackney or Tottenham or wherever. There is nothing racist about this kind of observation; it’s nothing to do with skin colour and everything to do with cultural identity. Oh, but it is racist, at least according to some.

David Starkey is a historian who specialises in Tudor England, an expertise which he has carried so far as the nation’s television screens. But he’s also an all-round media person, offering his opinions on a variety of subjects. I find him highly entertaining, not just the way in which he presents his historical documentaries, but his direct and no-nonsense approach in discussion. He speaks to the point, not suffering fools gladly or at all. Altogether there is a refreshing honesty to his manner, quite free from cant and anodyne platitudes.

Last Friday he offered his opinion on Newsnight, a current affairs show, saying that the recent riots happened because too many young white people “had now become black.” It was all because a “violent, destructive and nihilistic gang culture” had been embraced by as many white people as by blacks, a culture that militated against education. As for their speech patterns;

Black and white, boy and girl, operate in this language together. This language which is wholly false, which is Jamaican patois, that’s been intruded into England and this is why so many of us have this sense of literally a foreign country.

Shock, horror; crucify him!, crucify him!, the cry went out. To paraphrase Macaulay, I know of no spectacle more ridiculous than the liberal chattering-class in one of their periodic fits of moral outrage. One by one his fellow broadcasters fell over themselves in attempts to drive home the nail. Piers Morgan, another media person and a bit of a twerp, had a tweet – “RIP David Starkey’s TV career. And good riddance. Racist idiot.”

Now, if you don’t know Morgan let me just say that he is well qualified to refer to other people as idiots, being a first class idiot himself, a kind of jumped up chav, Burberry Man at his finest, easy to make fun of, as he has been made fun of during his embarrassing apperances on Have I Got News For You. He’s as stupid as Starkey is clever. He’s also a hypocrite. But he’s in so many ways typical of the oiks that dominates so much of contemporary life.

His word has been added to by Robert Preston, the BBC’s business editor, saying that “David Starkey’s nasty ignorance is best ignored not worthy of comment or debate.” Oh, really? Then why, I ask myself, did this clot feel compelled to comment? I don’t suppose it really matters now, as his intervention is doubtless evidence that Starkey’s TV career is indeed over, that his voice has forever been silenced by Auntie’s Marxist Men.

It really makes no difference that Starkey was talking about gang culture and not skin colour or ethnicity, a point he has made since, raising this issue at all has ensured him a passage to the gulag of all that is unacceptable, all of the issues that dare not speak their name.

Unlike Piers Morgan, aka Baron Phone Hacker of the Daily Mirror, I do not see any racism here. I see plenty of idiots, though, arbiters of what can and cannot be said. The evidence is overwhelming that the low life gangstas, bloods or buds or bluhs, the semi-literate rappers, black or white, are to blame for London’s madness, that they represent an alien culture and a wholly alien world that I despise, a threat to culture and every standard of civilized decency. They are a wretched sub-class, Morlocks and Calibans, who should be ushered off to some nether world where they can all speak their incomprehensible jargon in complete freedom. Either that or they could set up home besides Piers Morgan.