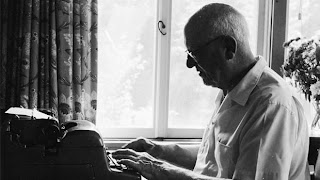 Open any anthology on fascism and there is bound to be an introduction telling you that fascism is difficult if not impossible to define. At my own risk I’ll hazard a definition: fascists, generally speaking, are wholly devoid of a sense of humour.

Let me give you a practical example. Take the great humorist P. G. Wodehouse, the satirist of the English upper classes, the creator of Jeeves and Bertie Wooster, possibly the greatest craftsman in words that our language and literature ever produced. Jeeves and Bertie are his best known creations, but there is also Roderick Spode.

Those who love Wodehouse will know all there is to know about Roderick Spode, the seventh earl of Sidcup, the founder of the Black Shorts, because when he got round to fascist politics there were no more shirts!

The trouble with you, Spode, is that just because you have succeeded in inducing a handful of half-wits to disfigure the London scene by going about in black shorts, you think you're someone. You hear them shouting "Heil, Spode!" and you imagine it is the Voice of the People. That is where you make your bloomer. What the Voice of the People is saying is: "Look at that frightful ass Spode swanking about in footer bags! Did you ever in your puff see such a perfect perisher?"

There are few writers more brilliant than Wodehouse and few less political. Caught up in the German invasion of France in 1940, he was subsequently interned as an enemy alien (“If this is Upper Silesia one wonders what Lower Silesia must be like.”) Released on the grounds of age, he went on to make a series of broadcasts in the summer of 1941 from Berlin at the behest of the Propaganda Ministry, light-hearted banter on life in Europe in typical Wodehouse style, intended for an American audience, for a people not yet at war.

Light-hearted or not, apolitical or not, they were enough for some in England to condemn him as a traitor. In hysterical over-reaction some libraries banned his books, clearly not conscious of the political irony here. He was even accused with total absurdity of being a Quisling, after the notorious Norwegian collaborator. As late as December 1944 in Parliament it was urged that he should be indicted on a charge of treason. Most absurd of all were those who combed through his books looking for ‘fascist tendencies’. What, fascist tendencies, in Bertie Wooster?! Oh, well, maybe in Jeeves.

Wodehouse was later to describe the decision to give these broadcasts as naïve, not treasonable or malicious. He was certainly not treacherous in the way that, say, Ezra Pound was treacherous, broadcasting in a distinctly political manner from Rome. But the criticism, hurtful and vicious on the part of some, caused him to move permanently to America after the war, where he became a citizen in 1955. It was an outcome anticipated by George Orwell in any essay published ten years earlier;

In the desperate circumstances of the time, it was excusable to be angry at what Wodehouse did, but to go on denouncing him three or four years later -- and more, to let an impression remain that he acted with conscious treachery -- is not excusable. Few things in this war have been more morally disgusting than the present hunt after traitors and Quislings…I have striven to show how the wretched Wodehouse -- just because success and expatriation had allowed him to remain mentally in the Edwardian age -- became the corpus vile in a propaganda experiment, and I suggest that it is now time to regard the incident as closed. If Ezra Pound is caught and shot by the American authorities, it will have the effect of establishing his reputation as a poet for hundreds of years; and even in the case of Wodehouse, if we drive him to retire to the United States and renounce his British citizenship, we shall end by being horribly ashamed of ourselves.

Sad to say the accusations have not entirely gone away, fresh fuel being added by a recently declassified Ministry of Intelligence (MI5) memo, part of a file on Werner Plack, an official of the German Foreign Office who acted as Wodehouse’s minder. Reported recently in the Times, it mentions an interview with H. W. Flannery, an American journalist, in which the author is alleged to have said that he was at liberty in Berlin but had to report occasionally to a “Mr. Slack or Black or something”, whom he claimed to have met while in the internment camp.

The memo says “This clearly referred to Werner Plack and was clearly intended to suggest that Wodehouse had so little acquaintance with the German foreign office official that he was uncertain as to his name.” But MI5 already knew that Wodehouse was acquainted with Plack, the two having met in Hollywood prior to the war, where the German was acting as a film extra and a spy. The memo concludes “This incident suggests that Wodehouse is not always quite as frank and ingenious [sic] as he pretends.”

Oh, my, what a heavy burden of guilt, a Plack by any other name would smell as sour! Poor old P. G; poor old Bertie, the one moment in his life when he really needed Jeeves the dashed fellow had taken a spot of French leave!

Although Wodehouse was later to admit that he had, in his own words, made a ‘ghastly mistake’ in broadcasting from Berlin, he categorically denied Flannery’s statement that he had been misleadingly vague about his contacts with Plack.

It would seem obvious that Flannery, a rabid anti-Nazi who believed – wrongly – that Wodehouse had done a deal with the Germans to get out of the internment camp, is far from being a reliable source. But no matter; if this is the weight of the evidence then it is ludicrously light.

I would excuse Wodehouse anything, a return for all the delight he gave me when I was at school, trying to suppress my laughter, reading undercover by torchlight after lights out. We, as a nation, treated him shabbily when he should have been treasured. Our loss was America’s gain.

It is a good rule in life never to apologize. The right sort of people do not want apologies, and the wrong sort take a mean advantage of them.