An Alibi for Pigs 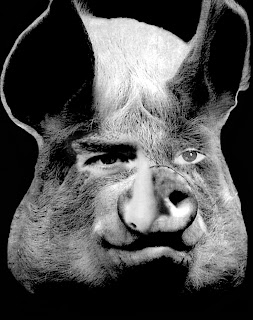 Sir Tony Brenton, the former British ambassador to Moscow, writing in the Times on Friday, said that most people under thirty will be ‘blissfully ignorant’ of the nonsense of Marxism, which is apparently undergoing something of a popular and intellectual revival in the fallout from the latest ‘crisis’ of capitalism.

Under thirty I may be but I am assuredly not ‘most people’, having made a particular study of utopian ideologies, of which Marxism is by far the most repellent. It was delivered to the world by a bearded prophet in tablets of stone, grave slabs, really, for the millions done to death in the name of these commandments of perfection.

Marxism really is the road to hell. I’ve never understood why fascism is held in such obloquy, why symbols like the swastika are perceived with revulsion while the communist star is not. I’ve seen the traces of communism, the shadows, and the bones, it left in Cambodia. I see the traces indirectly. Among other things I’m reading Nothing to Envy, Barbara Demick’s account of life in North Korea, which really is nothing to envy. Imagine the life of a termite. No, imagine something worse.

Apparently Das Kapital shot up the best seller lists after the banking crash of 2008. Perhaps you have a copy in your book collection? Have you read it; have you even glanced through its pages? Yes, I know: it really is awful, the dullest book ever written, the prose so turgid and heavy that it won’t rise from the page. I imagine it stands proud in many a trendy household, occupying the commanding heights of the bookcase, accusatory, imperious and forever unread, the ultimate word in superfluous value.

Professor Terry Eagleton, a sort of intellectual lumpen proletarian, a useful idiot of the most idiotic kind, has just published a book called Why Marx was Right, providing further proof, if proof is needed, that he and his kind have learned nothing and understood less.

Yes, markets are not infallible; they will continue to move in cycles, and boom and bust are features of free economies. But Marx was not right; he was bloody well wrong in everything, most of all in the contention that capitalism eats up its own profits and pauperises the working-class. Crisis after crisis we have had since Moses was interred at Highgate in north London, resting under an awful slab of old Eastern European monumentalism, but people are still better off than in the old dog’s day. Even in China, where Marxism coupled with blind dogmatism was responsible for unbelievable levels of suffering, free market capitalism has rescued the people from abject poverty, showing that history does not move in one direction only.

Marxism poisons everything it touches. As Sir Tony says, the civic spirit of Russia has still not recovered after seventy years of communist tyranny, which makes it all the easier for authoritarianism and corruption to flourish almost unchallenged.

Then there is the argument, he continues, that we have never had ‘real’ communism, that the revolution happened in the wrong places, that it will all be better the ‘next time’ around. It’s all fodder for muddle-brains like Eagleton and those who fly under his wing, a fairytale for the unreflective. The Marxist Utopia is predicated on the assumption that the world is a kind of cornucopia, forever pouring out the good things of life, ready to be shared with equality once the parasitical ‘bourgeois’ have been eliminated from the picture of perfection.

Time and again we’ve seen it; time and again we have seen the Lenin-style elites take the good things, always a scarcity, for themselves. People who read Orwell’s Animal Farm and see it as a fable about Stalinism are wrong; it’s a fable about hypocrisy and greed. Remember those wind-fall apples? The corruption did not begin with the triumph of Napoleon over Snowball; it was there from the outset. The revolutionary vanguard are all pigs. Marxism is the alibi of pigs.

Sir Tony’s article concludes with a reference to Hegel’s observation that the only thing we ever learn from history is that no one learns anything from history. Eagleton is a living reminder of this truism. Still, so long as we live in a free society, a capitalist society, we are all better off; he earns royalties from the mugs who take this nonsense seriously; I am under no compulsion to read this meretricious rubbish or contribute to his profits. In Utopia I would have no choice and he would have no income.