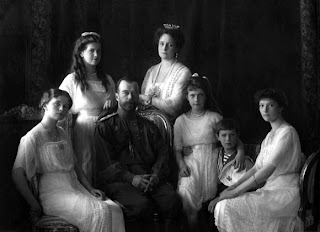 Among the more notable items I saw on my tour of the Kremlin on a particularly memorable Christmas Day, several years ago now, was the Faberge Eggs in the Armoury Museum, those splendid jewelled creations made by the firm of Peter Carl Faberge for the last two Tsars to mark the Easter holiday.

There is one in particular that stood out - the Kremlin Egg, a gift from Nicholas to the Empress Alexandra in 1906. For me there was something almost magical in this, a trace from the past, a link with those long dead royal martyrs, the first drops in an ocean of martyrdom.

The Russian royal family has long been a subject of unique and compelling fascination for me, not just Nicholas and Alexandra but also Alexi, the Tsarevich, murdered when he was only fourteen years old, and his four sisters, the grand duchesses Olga, Tatiana, Maria and Anastasia, who referred to themselves collectively as OTMA.

The murder of the royal family in July 1918 in the sinisterly named House of Special Purpose in Yekaterinburg was a hideous crime. Even at the time it was a source of some embarrassment to the Soviet government. It was over a year after the event before it was prepared to admit that Alexandra and the children had been killed alongside Nicholas, and even then the Social Revolutionaries, opponents of the Bolsheviks, were blamed for the atrocity.

The guilt has haunted Russia ever since, evidenced by the fact that no fewer than three official inquiries have been opened into the regicide since the fall of communism, opened and then closed again just as quickly.

Now the Grand Duchess Maria Vladimirovna Romanov, a descendent of the last Tsar who also claims to be his heir, has won an important victory in a Moscow court, obliging Russia’s Investigative Committee to hand over the eight hundred page dossier it holds on the killings and the aftermath. Her lawyer, who claimed it as a triumph over “legal nihilism in Russia,” says that she plans to publish the documents along with her own assessment of the investigation carried out by the state prosecutors.

Even after the fall of the Soviet Union the official line taken by the judicial system was that massacre had been a ‘crime’ rather than an act of state policy. The reticence here clearly goes beyond the legal system into the heart of Russian history and politics. There has never been a serious attempt to come to terms with the past, no truth and reconciliation committee to draw attention to the criminality of a huge part Russia’s recent history. After all Lenin, or what purports to be Lenin, the criminal in chief, still sleeps in Red Square, an object of idle curiosity.

I honestly don’t think these documents will tell us much that we don’t already know. The communist line that it was chiefly the work of the local Ural Soviet, backed by Yakov Sverdlov, then Party Secretary, was an obvious lie, an attempt at official distance. Perhaps we may learn a little more about the precise role of Lenin and the Bolshevik government. I said in a previous article (The Murder of the Romanovs) that Lenin was at least guilty by association. It will be helpful if the accusation can be made more exact.

The remains of the Tsar and his family were finally interred in the Cathedral of Saint Peter and Saint Paul in Saint Petersburg. Now canonised by the Russian Orthodox Church, they stand as testimony to the crimes of communism. Transfigured in death, the triumph of the Romanovs has as been all the greater.
Posted by Anastasia F-B at 15:36