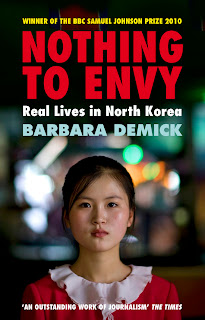 It was in March 1999 that Dr Kim left the fatherland. She couldn’t take any more. She had already given up paediatric medicine because she could no longer bear to look into the eyes of the starving children. She switched to pure research, which at least allowed her to get away from the dying, from people she was completely unable to help. But the doctors were starving too; more time was spent in foraging for food than medical work.

Kim dropped in weight to eighty pounds; her breasts shrivelled and her periods stopped. Finally she gave up going to work altogether. What was the point? She did not have the energy. Besides, she had long stopped receiving any pay; all the doctors had. All that mattered was finding food. There was none; the countryside had been stripped as if plagues of locusts had passed. The only remaining hope was to go to look for some long lost relatives living in another land, names from a list that her father had given to her prior to his own death, a legacy of desperation.

With difficulty she travelled north to the border, unable to afford to hire a guide. Spring was coming but winter had still not lost its sting. Covered by darkness, she wadded waist-deep across the freezing river, thrusting aside the lumps of ice, hoping that the border guards would be sleeping. Numb and frozen, she made it to the other side, where, weak with hunger, she had no other course but to throw herself on the kindness of strangers.

At one farm she found the gate unlocked, pushing it open and peering into the courtyard. There, on the ground, was a bowl of pure white rice, a luxury she could not remember when she had last seen. More than that: the rice contained scraps of meat. Who could possibly leave such precious food on the ground like this? Then she heard a bark. A moment’s epiphany; it was for a dog. At once a lifetime of faith fell away. This was China; here the dogs ate better than doctors in North Korea.

That, for me, was the most striking story in a striking book – Nothing to Envy: Real Lives in North Korea by Barbara Demick. I don’t really think there is much more to be said about this brilliant work of reportage, which deservedly won the Samuel Johnson Prize for Non-Fiction last year, that hasn’t already been said. I’ve come lately, a point when the stock of superlatives has all but been exhausted. All I can do is add a few words of appreciation and admiration for a book that unfolds a tragedy in a wholly intimate and human fashion, through the eyes of those, like Dr Kim, who had experienced it first hand.

A picture is worth a thousand words, so is said. Let me refine that by saying that a million lights are worth a single darkness. Look below: there is North Korea by night, an island as black and as impenetrable as the seas, a contrast with the surrounding illumination. This should tell one all there is to know about an implosion, the death of a country, the death of its people and the death of a tawdry ideal. 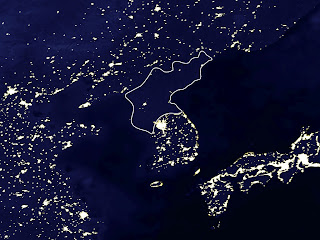 Demick gathered the material for Nothing to Envy while she was based in Seoul, working as a foreign correspondent for the Los Angeles Times. Although she travelled to North Korea her visits, like that of all foreigners to a state that has effectively quarantined itself and its people from the world, were highly supervised. The truth behind the façade of Pyongyang, the capital that serves as a kind of Potemkin village, would have to be sought elsewhere. It came in a series of interviews with defectors living in South Korea, six of whom are featured here, all coming from the closed city of Chongjin in the north-east.

It’s worth stressing that none of these people were political dissidents. Rather they were all believers, believers in the infinite benevolence of Kim il-Sung, the Great Leader, and Kim Jong-ill, the Dear Leader. After all, in the words of the children’s song, the words that Demick uses in the title, “We Have Nothing to Envy in the World.”

No, it wasn’t politics that forced them into exile: it was hunger, the famine which gripped this ideological museum in the 1990s and is thought to have been responsible for the deaths of as many as two million people, reduced in their final extremity to eating bark and weeds. It was only afterwards that they became aware that with little food came the big lie. There people were in the dark, both literally and figuratively.

Demick’s story is as good a piece of journalism as I have ever come across, written in a clear and undemonstrative style. She tells the story of people like Jun-Sang, a science student and Mi-Ran, the teacher with whom he had a chaste affair in the all-enveloping darkness of their homeland, neither of whom dared confide in the other that they were making plans to escape. There is the story of Mrs Song, another true believer, who watched her husband and son starve to death.

They were told nothing, the government told them nothing, other than issuing exhortations to eat less when there was nothing to eat at all. When people had taken to removing kernels of undigested corn from the excrement of animals the state news agency was reporting the case of a man whose stomach had allegedly burst open from eating too much rice.

The few who eventually made the passage to South Korea came almost as a different species, stunted by hunger and deprivation. Fifty years of separation, fifty years of the Great Leader and the Dear Leader, had created a kind of sub-group of humanity, people who took time to adjust to a new life, a people who realised just how much they had to envy, even so far as Chinese dogs.

Nothing to Envy is an extraordinary book by an author whose style of reporting recalled for me the narrative power of Truman Capote’s In Cold Blood. It’s difficult to remain dispassionate in reading books like this, no matter how much one tries.