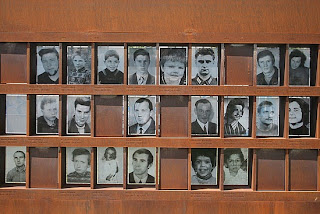 Ida Siekmann was 58 when she died, jumping from a third floor window in the summer of 1961. Chris Gueffroy was only 20, shot while trying to swim across a canal in the winter of 1989. What's the connection between the two? Simply that they were the first and the last victims of the Berlin Wall, killed trying to escape from a bleak communist tyranny. Gueffroy's death was particularly tragic, not just because of his age, but because a few months later the Wall came a-tumbling down, the greatest revolution of the twentieth century, a true springtime of the people and of liberty.

Siekmann and Gueffroy were the overture and finale of a long tragedy. We will never know exactly how many people were killed between their deaths, between August 1961 and February 1989. The official figure stands at 136, though it is thought to be higher. Overall up to seven hundred people are estimated to have been killed in attempts to escape from the old East Germany, the so-called German Democratic Republic, at various points along the border. It’s also worth noting that the guards who shot them earned a bonus for each and every kill, money and time off, something they can reflect on as they enter the twilight of life.

Earlier this month, to commemorate the fiftieth anniversary of its construction, Berliners along with people from elsewhere in Germany gathered in the city's Bernauer Strasse, the scene of many escape attempts, where a memorial is now situated, visited by half a million people every year. "We bow our heads in remembrance of all who died at the Wall and of the hundreds who died on the inner German border", said Christian Wulff, Germany's president. "The dead and wounded", he continued, "the hundreds of thousands who were imprisoned and politically harassed aren't the only victims of this Wall. Millions were also forced to renounce the lives they wanted to live."

The construction of the Wall was an act of monumental bad-faith. Only two months before it went up, Walter Ulbricht, the hatchet face of a hatchet regime, announced that "no one has any intention of building a wall." The concrete and the barbed wire were already on order.

It was on the early hours of 13 August that 'Operation Rose' was launched. Like the Japanese attack on Pearl Harbor in December 1941, this is another day which will live in infamy, a Sunday, deliberately chosen to catch people off-guard as they enjoyed a summer day off. Up to this point Berlin was the only place in the world where people could move with relative ease from the communist East to the free West.

As I said here recently, the new structure was described officially by the government of the East as the “Anti-Fascist Protection Wall", when it should more accurately have been called "We Have to keep our Miserable Citizens in Wall.” Some 3000 had been leaving every month up until that point. Amazingly 2.5 million of a population of 19 million left in the brief thirteen years the German Democratic Republic had been in existence.

There is little left now either of the Wall or of the ideological perversions that conjured it into existence. The so-called wave of the future is now the ripple of the past. The sections that are left are quite rightly being preserved as a memorial, a way of ensuring that Ida Siekmann, Chris Gueffroy and all the other victims of Communism are never entirely forgotten. 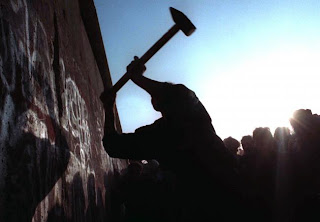