Sonata of a Good Man 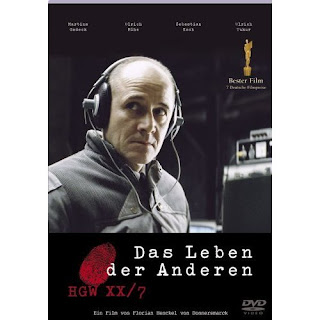 It’s fifty years since construction began on the Berlin Wall in August, 1961, dividing a city, dividing families, dividing lives. Built by the government of the then German Democratic Republic, it was described absurdly as the “Anti-Fascist Protection Wall”, when it should really have been called the “We Have to Keep our Miserable Citizens in Wall.”

It stood for so long as the ultimate symbol of the abject failure of communism. I have no great opinion of John F. Kennedy, but his Berlin speech summed up the situation with poetic intensity;

There are many people in the world who really don't understand--or say they don't--what is the greatest issue between the free world and Communist world. Let them come to Berlin!

There are some who say that "communism is the wave of the future." Let them come to Berlin!

And there are some who say in Europe and elsewhere, "we can work with the Communists." Let them come to Berlin!

And there are even a few who say "yes, that it's true, that communism is an evil system, but it permits us to make economic progress." Lass' sie nach Berlin en kommen! Let them come to Berlin!

Freedom has many difficulties, and democracy is not perfect. But we have never had to put a wall up to keep our people in, to prevent them from leaving us!

It was the Wall I was thinking about recently, not just the physical wall but the wall that states like the GDR constructed in the minds of people, a wall of secret and lies intended to hide hypocrisy and corruption. I saw Das Leben der Anderen – The Lives of Others – when it was first released in 2006, before I started this blog. I decided to revisit it recently on DVD on this anniversary year.

Directed by Florian Henckel von Donnersmark, the movie tells the story of a Gerd Wiesler (Ulrich Mühe), an idealist, a patriot, a believer…and an officer in the Stasi, the notorious East German secret police. He is assigned to spy on one Georg Dreyman (Sebastian Koch), a playwright, one of the state’s cultural icons. Why? Well the simple secret policeman finds out the secret: it’s because the Minister of Culture (Thomas Theime) wants to get his fat paws on Dreyman’s girlfriend, Christa-Maria (Martina Gedeck), and it would be ever so helpful if the inconvenient artist could be removed from the equation.

Bit by bit, in the course of his surveillance of Dreyman, a sordid reality chips away at Wiesler’s idealism, as the system is exposed in all its corruption, the corruption not just of the politician but also of his immediate superior in the Stasi, who would destroy a man’s life simply to advance his own career.

His disillusion is matched by that of Dreyman, hitherto a committed Communist, who sees a colleague, blacklisted by the state, driven to suicide. The two men, unbeknown to Dreyman, enter into a silent collaboration, with the policeman acting less as a spy and more as a protector, deliberately sabotaging the investigation and hiding evidence of the playwright’s exposure of suicide rates in the GDR in an article published anonymously in the West. As a consequence his own career is ruined.

Fast forward to the new united Germany. The ex-Stasi agent is now working as a postman. Dreyman, now a novelist, discovers that he had been placed under surveillance. Not just that but a case could never be made against him because he had his own guardian angel, HGW XX/7, Wiesler’s Stasi code, which he finds in archives now open to the public. The novel he then writes, Sonate vom Guten Menschen, carries a simple dedication: To HGW XX/7 with gratitude.

It’s a tremendous piece of cinema, a simple and moving story, proof that lies have a lease as short as summer, that goodness and virtue can survive even the worst forms of criminal turpitude.