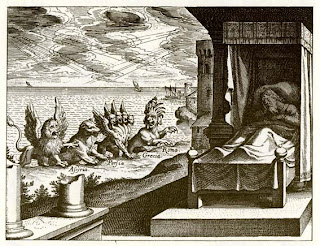 I recently mentioned, in a response to Calvin, the Fifth Monarchists and Thomas Venner, a movement and a name that will be familiar to students of seventeenth century England and the millenarian madness that gripped the country as a fever grips a body. I thought I would say a bit more about this.

The movement itself took its name from the Second Book of Daniel, where Nebuchadnezzar, king of Babylon, has a dream interpreted for him by the prophet;

The king had had a dream which greatly perturbed him. He burned with eagerness to know what it meant, but reasoned that he could be sure that an interpretation was correct only if the interpreter was able to narrate the dream itself without being told it. Since none of his masters of occult lore was able to do this, the king ordered his captain of the guard to execute all the savants of Babylon. The officer proceeded to do so, and since Daniel and his companions came under the definition of savants, they were also to be put to death. On asking the captain of the guard for the reason and receiving his answer, Daniel persuaded him to discontinue the slaughter for a few hours and promised that at the end of that time he would come up with the answer to the king's questions. Then he and his companions prayed, and the solution was revealed to Daniel in a dream. Brought before the king, Daniel narrated the king's dream and interpreted it to mean that Nebuchadnezzar's domination of the whole world would be followed by the successive world ascendancies of three other monarchies, after which God would set up a fifth monarchy that would destroy the four previous monarchies and would endure forever.

One of the most important things to bear in mind about the politics of the mid-seventeenth century, when the world truly was turned upside down, is that the Bible became a kind of manifesto, used to interpret and explain events in the secular world, used, moreover, as a guide for action. As we have come to understand, there is no greater danger than the naïve and literal interpretation of sacred texts.

The Fifth Monarchists were a group of people who believed in the literal truth of Daniel’s prophecy, that the four monarchies had come and gone, evidenced finally by the execution of Charles I in January, 1649, and that the Second Coming was immanent, in which Jesus would set up the Fifth and final kingdom of the earth.

So who were they, these people, the Taliban come Marxists of their day? They were the godly in league with God; at least they were according to Thomas Gataker, a leading seventeenth century clergyman and theologian. In practice they were an odd mixture of puritan enthusiasts: soldiers, clergymen, tradesmen, small farmers and the urban poor. Some of them wanted to transform the world by the power of prayer, others by the power of politics.

In normal times history would have passed these people by unnoticed. But the Civil Wars followed by the Interregnum was the most abnormal time in the whole of English history. Prophecy, in one form or another, gave shape to dreams. Besides texts drawn from Daniel and the Book of Revelations, there were popular contemporary works, notably Henry Archer’s The Personal Reign of Christ upon Earth, published in 1642. Archer was nothing if not exact, always a danger with prophets. The Jews would be converted, he said, in 1650, the Turks destroyed - presumably meaning Muslims in general - and Christ would return to earth in 1700. But that wasn’t quick enough for some, as the removal of one king in 1649 clearly portended the arrival of another.

In the meantime they had to make do with Oliver Cromwell. It was in the court of this ersatz king that the Fifth Monarchists achieved their greatest influence. The most influential of all was Thomas Harrison, one of the men who condemned King Charles to death. It was on his urging that Cromwell summoned in 1653 the Parliament of Saints or the Nominated Parliament, better known as the Barebones Parliament after one of its members, a Fifth Monarchist who went by the name of Praise-God Barebone. Yes, that really was his name!

This was the high noon of the Fifth Monarchy men, but as saints are notoriously inept in managing earthly affairs, the Barebones Parliament collapsed after only a few months, dismissed by the more conservative elements around Cromwell, in no mood for millenarian radicalism. Thereafter the movement went in to decline, horrified by the establishment of the Protectorate, King Cromwell and no King Jesus. For these men the new Lord Protector was none other than the Anti-Christ.

Plotting away in the background, they immersed themselves in fresh prophecies, some centring on the year 1666 and its supposed relationship to the Number of the Beast from the Book of Revelations. In other words, it was a case of paradise postponed, until next time, when the Beast will be succeeded by Beauty. Cromwell went and a new king came, though not King Jesus.

Enter Charles II, of blessed memory; enter in his shadow one Thomas Venner, a cooper by trade. Actually Venner was not completely unknown to history, having been involved in a 1657 plot to depose Cromwell. Now, in their senescence, the rump of the Fifth Monarchists gathered around this petty prophet, intending to overthrow the newly restored king. In his biography of Charles II Ronald Hutton describes these people as politically mad if not clinically so, a judgement with which I’m in complete agreement.

Armed with the power of prophecy and little more, Venner and some fifty men began a rebellion against the government in early January 1661, parading around London, shouting out “King Jesus and the heads upon the gates.” There were to be heads upon the gates alright – their own.

Venner’s Rising, as it came to be known, lasted all of four days, more of a kind of minor riot with intent. Suffering from multiple wounds received in fighting with royal troops, Venner was executed along with a number of others. Thereafter the movement slipped into the final shadows, not even revived by the portentous events of 1666, when life in London really did become more beastly than usual. 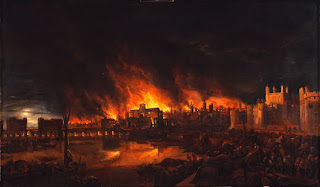