The Children Are Dead 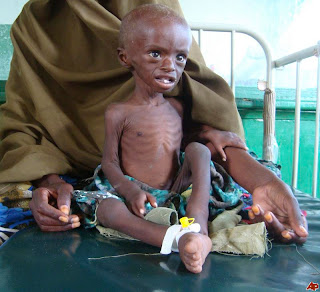 Commenting in the Times on the present famine in Somalia, Tristan McConnell said that that the situation is set to get worse – “There are no rains expected for months and there will be no harvests until the end of the year at the earliest.”

Wherever the rain falls it does not fall on Somalia. It’s a disaster, an act of God, a theme taken up by the various aid agencies last month, who were blaming it on the “worst drought in sixty years.” Yes, it’s the worst drought in sixty years apart, that is, from the heavy downpours that have been flooding refugee camps in Mogadishu, the capital of this state that is not a state, over the last few days.

The simple fact is that the whole thing is a lie: God is not responsible for the starvation, people are, and the people I have in mind are the Islamists of al-Shabaab, who, as Aidan Hartley reports in the Spectator, control large parts of the south, ruling “over the population in a style reminiscent of Pol Pot’s Cambodia crossed with the Taleban.” Somalia is suffering from a famine alright, but it has political rather than natural causes.

In the same issue of the Times McConnell gives a more exact picture, telling of the suffering induced by the brutal and puritanical rule of the fundamentalist al-Shabaab, an organisation with links to al-Qaeda. Aid agencies are banned from the territory it controls. Omar Abdirahman, a local farmer, said “We’ve had a lot of drought and still lived. But al-Shabaab have blocked humanitarian aid and they stole my goats and livelihood.”

The brutish stupidity of the Islamists of al-Shabaab, which has seen grain stores in the sorghum-growing areas looted and farmers so intimidated that they have given up sowing crops altogether, is compounded by a form of inter-tribal racism. The victims of the militants are members of weak, minority or less well-armed clans, particularly the Rahanwein. Not only has food been requisitioned, or farmers subject to extortionate ‘taxes,’ but there are also reports of sexual violence against refugees.

So, people in the West, being asked for donations, once again being presented by conscience-moving pictures of malnourished children, are being told half-truths at best. Uneven rainfall is certainly causing problems but not so bad that they could not be overcome in normal circumstances. But Somalia is a country that has long lived with the most abnormal circumstances imaginable. Even aid workers are moved to acknowledge that the problem is less lack of rain than the failure of the Somali state.

Send your donatioins by all means if it will salve your conscience but it’s as well to be aware that the aid it buys is likely to end up as part of the politics of food, with local militants using it to achieve their own particular ends, regardless of the perceived suffering. As Hartley says, the picture is likely to be no better than that of the last famine crisis of 1992: some will get rich, most will die, rivals will fight over the foreign bonanza, food will be looted, aid workers will be kidnapped and murdered. Food aid, in other words, will only make a bad situation worse.

As a result, all of those who donated so generously to the famine appeals will end up loathing the Somalis, who they will blame for being ungrateful savages. World governments will hold a conference, then wash their hands of Somalia yet again. But it won’t save those starving children.