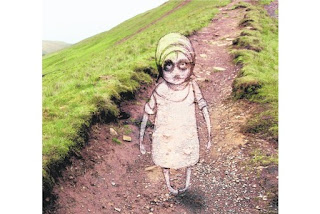 In one of my very early blogs here I wrote about the case of Brigitta Hörner, a seven-year-old girl who once lived in Rothenburg ob der Tauber in seventeenth century Germany (Remembering the Little Witch Girl). In 1639, for reasons unknown, Brigitta claimed to be a witch. I wrote;

In much the same fashion that was appear later that century during the Salem witch trials Brigitta began to identify the members of her 'coven', adults from both Rothenburg and Spielbach. This added to the social tensions in the area, with people asking her to identify those whom they suspected of witchcraft. It was concerns over public order that caused the city council of Rothenburg to have Brigitta arrested on 8 July. She was now widely known in the area as the 'Little Witch Girl.'

This was a dangerous time. The Great European Witch Craze had not yet come to an end. Hysteria, fuelled by no more than accusation, could have taken hold of the community in much the same way it was do elsewhere. But the authorities, who treated Brigitta with kindness, decided that her stories were simply not plausible, allowing the matter to settle down.

I called this back to mind on watching The Pendle Witch Child, a BBC documentary about another accusation of witchcraft, this time in the county of Lancashire in north-west England. It’s a case that also involved the testimony of a little girl, one with a wholly different outcome. In concerned nine-year-old Jennet Device, whose evidence was enough to send her whole family, her mother, her brother and her sister to the gallows, along with a number of others.

It’s England in 1612. The country is on the cusp of huge changes, poised between the Age of Superstition and the Age of Enlightenment. It’s a time of great religious and political uncertainty, a time of fear and suspicion; against perceived outsiders, against Catholics in the wake of the Gunpowder Plot of 1605, against all those who are believed to be a threat to good order.

On the throne sits James I, the intended victim of one plot after another, not just the political terrorists of 1605 but those who allegedly tried to ensnare him by witchcraft when he was still king of Scotland. James, the wisest fool in Christendom, according to his fellow monarch Henri IV of France, was a bit of an expert when it came to the nefarious arts, bringing all sorts of Presbyterian prejudices from the north, all outlined and codified in Daemonologie, his witch-hunter’s manual.

To Lancashire now, a county in England’s wild north-west frontier, a place still considered to be beyond the pale by those living in the tamer regions of the south. This was an area where old religions and old beliefs did not die readily. Here a great many remained loyal to England’s Catholic heritage. Others remained loyal to an even more ancient set of beliefs, giving particular prominence to the wise women, the local healers in the absence of any other, the only healers the poor could afford.

It’s a dry and explosive mixture that really only required a spark, that and an ambitious guardian of public order, ready to fan the ensuing flames. The spark came in March, 1612, when one Alizon Device laid a curse on a peddler by the name of John Law. Alizon, the older sister of Jennet and part of a local family of beggars, was at once convinced that she had the power of a witch. Full of contrition for the doom that had befallen Law, who on the evidence seems to have suffered a stroke, she held to her story, bringing it so far as the guardian, Roger Nowell, a local magistrate.

Now a witch hunt was truly underway, a hunt that drew in not just suspected wise women but Catholic dissidents, as the circle moved wider and wider still. Enter Jennet, full of accusations against her own family and their neighbours.

There was something deeply tragic about this little girl, as tragic in her own way as Brigitta Hörner. The greater tragedy is that her accusations, unlike Brigitta’s, were taken seriously. She had a story to tell and she told it in open court, a key witness for the prosecution. Was it right to trust the word of a child when there was no other corroborating evidence? Yes, of course it was; had not the king said as much in Daemonologie?

Why did Jennet act as she did? We can’t be sure but according to Simon Armitage, who presented The Pendle Witch Child, she seems to have harboured a particular animus against her family, perhaps for neglect, perhaps for other perceived slights. After her mother, making hysterical appeals from the dock, was removed from the court at the little girl’s request, she proceeded to give her evidence with calm authority, even evading a trap laid out for her by the judge.

As the story unfolded it was brought vividly to life by some haunting hand-drawn images of Elizabeth, the mother, of Alizon, the sister, and of little Jennet, who looked particularly forlorn. Tragic and malicious, a pawn and a player, she was to have an impact far beyond Pendle, beyond Lancashire, even beyond England itself. It was her actions and this precedent that allowed child testimony to play such an important part in Salem in 1692.

Ironically Jennet herself became a victim and by the very process that she initiated. In 1634 she was accused of witchcraft along with a number of others on the fantastic evidence of a ten-year-old by the name of Edmund Robinson. But times had changed; a new mood of sceptical inquiry was coming into prominence. The political, social and religious tensions that sustained events earlier in Pendle - and later in Salem - were in abeyance. Robinson’s accusations were eventually dismissed as fantasy, though not until after he had initiated a mini reign of terror. It did not do Jennet much good. Though acquitted, the evidence suggests that she died in jail.

It’s easy to dismiss this sort off thing, part of the age of superstition, not the age of reason. But reason, as Armitage pointed out in his presentation, is always superficial. Fear, superstition, if you will, remains with us in some fashion or another, though the targets may have altered. Demonization, after all, is not limited to Daemonologie, and witches come in many guises.