Breivik and the Left 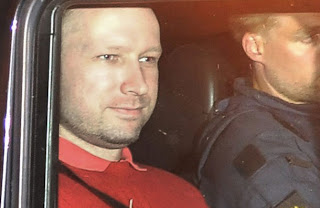 It’s just over a week now since that dreadful outrage in Norway, that massacre of the innocents in a nation of innocents. The sensible thing to do was to watch and wait before passing comment, but sense is no impediment to opinion, the more ridiculous, the more opportunistic and, yes, I have to say this, the more obscene the better, raking over tragedy to score political points.

There are two excellent articles in the latest issue of the Spectator reflecting on this issue, Breivik and the right by Douglas Murray and If you think the left is twisting Norway’s tragedy check out the neo-Nazis by Rod Liddle.

The essential point, as Murray says, is that there is a tendency – particularly strong on the left – to use any horrific act as a megaphone for existing prejudices. Even Tom Harris, a Labour Member of Parliament, remarked on something that was immediately obvious to me – “…a palpable relief…swept through the left when the identity of the terrorist was known…Here, thank God, was a terrorist we can all hate without equivocation: white, Christian and far right-wing. Phew.”

Within days of the attack the New York Times, the American version of the hyper-liberal Guardian, was insisting in a slightly sinister fashion that a “new attention” would have to be focused on “the subculture of anti-Muslim bloggers and right-wing activists.” Murray notes there was no qualification here, no reference to ‘far-right’ or psychopathic extremists, just right-wing activists, a category, incidentally, that includes me, a libertarian blogger, a conservative and a Conservative. Let the witch-hunt commence, the McCarthyism of the left

Beyond readers of the New York Times, people may not be fully aware just how hysterical comment became in Europe. There were those prepared to draw a line directly from the recent denunciations of multi-culturalism by President Sarkozy of France, Chancellor Merkel of Germany and Prime Minister Cameron of Britain to the Norwegian massacre. The Independent, possibly the dullest newspaper on the face of the planet, excepting only Granma in Cuba, turned its fire on Geert Wilders, the Dutch politician who has warned of the dangers of mass immigration.

There is no subtlety at all in this. It’s an attempt to silence debate over an important issue, damning an argument by perverse association. We saw this in England, where for so many years concerns over immigration were denounced as ‘racist’, ironically giving succour to parties and people who were racist. Now the issue is openly acknowledged right across the political spectrum.

Perhaps the most absurd comment of all on the Norwegian massacre came from a certain Lee Jasper, an aid to Ken Livingstone, the former mayor of London. I should say, by way of information, that Livingstone, when he was in office, played abject and fawning host to a certain Yusaf al-Qaradawi, a Muslim cleric who just happens to praise the virtues of suicide bombing, the beating of women and the execution of homosexuals.

None of this matters to Mister Lee, who immediately concentrated fire on Boris Johnson, the present mayor of London, unwise enough to defeat Livingstone in election. What was his offence? Is he an anti-Muslim blogger, is he a Knight Templar, did he encourage Breivik in his lunacy? No, none of this. Apart from the fact that he is a leading member of the Conservative Party his hair is the same colour as Breivik’s, justification enough, surely? Come to think of it, so is mine. I think I detect a pattern.

I would be surprised if many of the people who may read this have ever heard of Stormfront, although the name itself may give sufficient clue over the kind of territory I’m about to enter. It’s a website for a certain kind of political activist, not people one would expect to have anything in common with the New York Times.

But the Hitler-loving Stormfront – yes, if you have not taken the point, this is a site for genuine ‘right wing’ extremists – came out with its own knee-jerk explanation and call for a witch-hunt. One might expect these people to wave flags for Breivik. But, no; he was no more than a tool, you see. Need I tell you for whom? Well, for those who have not guessed, the Norwegian crackpot is an instrument of Mossad and the demonic Jews.

Now I’m going to let Douglas Murray speak for himself, an impressive passage in a particularly impressive piece of journalism;

Some comparisons between Islamist extremists and Breivik are useful. They are certainly similar types of sicko (a fact I hope he comes to realise one day). But there are also salient differences. At least one must be that, in the wake of Breivik’s atrocity, not a single Christian leader, right-wing journalist or right-wing politician (including those cited by him) expressed anything other than condemnation and revulsion for his actions. No ‘ifs’ or ‘buts’. No ‘important to understand the wider context’ or ‘driven to despair’ nonsense. Just horror. Unlike the suicide bombers who gets shrines and public squares named after them, Breivik (like the Brick Lane/Soho bomber) will only be memorialised among a sick and covert coterie of extremist loners who, though undoubtedly dangerous, speak for no one.

Indeed, they speak for nobody; Breivik is nobody. It’s wretchedly sad that there are people so blinded by political and ideological prejudice that they are quite unable to appreciate this simple fact.
Posted by Anastasia F-B at 15:47