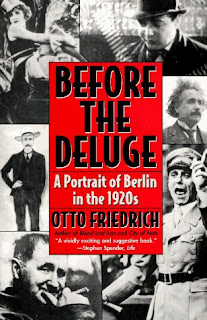 Throughout history there have been periods of calm between storms, to use the cliché, though these might be better described as illusions or mirages. I’m thinking of Weimar Germany, specifically of the period from the end of the post-war inflation in 1923, a time which saw the revaluation of all values, and the Great Depression of 1929, a time which saw the devaluation of all lives.

This was the golden age, to use yet another cliché, a period when the country flourished, sustained by short-term credit allowed for under the Dawes Plan, a scheme to stabilise the German economy and thus secure a continuing stream of reparation payments to the victorious allies. The whole thing was built on an absurdity that simply could not last, a belief in no tomorrows.

But that today, while it lasted, produced a mini-renaissance almost without parallel in history. It was the time of Walter Gropius and the Bauhaus, the time of George Groz, Albert Einstein, Bertolt Brecht, Kurt Weil, Arnold Schoenberg, Lotte Lenya, Peter Lorre, Marlene Dietrich and so many others, architects, musicians, scientists, writers, actors, singers, players of all sorts who strutted and fretted their hour upon a brilliant stage. What players; what a theatre.

In Before the Deluge: A Portrait of Berlin in the 1920s Otto Friedrich comes as a spectator, charmed, captivated and bewildered all at the same time. I have mixed feelings about this book, an interesting though somewhat uneven treatment of an important subject. Although it is offered as a portrait of Berlin, and a good bit of the action is set there, it’s really more of a general cultural and political history of Weimar Germany, one not confined to the 1920s.

It’s quite an old book now, originally published as long ago as 1972 at a time when many of the people who witnessed life in Germany before the rise of Hitler were still alive and able to give accounts of their experiences. There are artists, intellectuals and scientists. But where are the ordinary people, where are the ordinary Germans, the Berliners themselves? If you are looking for a fluent social history this is not it.

What is it exactly? Let me put it this way. The chapter dealing with the new scientific theories of the day – God Does Not Play at Dice – shows how all certainty seemed to vanish, all notions of predictability and Newtonian law. Instead the universe was depicted by Werner Heisenberg and others as something quite random, a bit like a Dada montage, after the artistic movement more given to anarchy than order. Well, this is a Dada book, with bits and pieces falling here and there!

I hope I’m not being too harsh; there is certainly a lot here to intrigue and charm, but it lacks focus - the overall treatment is far too random. Friedrich does not seem clear over what he is trying to achieve. There is a bit of everything: a bit of political history, a bit of social history, a bit of intellectual history, of the arts, of music, of architecture, of the theatre, of the cinema. All are visited but with no real thoroughness.

The anecdotes of people like Lotte Lenya are certainly interesting but in the end I felt a sense of frustration. The lengthy account of the political intrigues and machinations which saw Hitler emerge as Chancellor in January 1933 is really quite pedestrian, material far better handled elsewhere.

The problem is the author is not true to his subject. There is no real intimacy and too much incidental chatter. After over three hundred pages I was no closer to understanding what life was like at this time in the German capital than I was at the outset. Although far less sweeping in scope, Roger Moorhouses’s Berlin at War: Life and Death in Hitler’s Capital, 1939-45 is a much more assured, mole’s eye view of life in the city.

I did enjoy Before the Deluge to a degree but it did not satisfy my hunger, a hunger to know what life was really like in one of the most intriguing cities in one of the most intriguing times in history. I want to know what it was like to be there on the opening night of Die Dreigroschenoper – The Three Penny Opera – specifically at the point when the Kanonen-Song was heard for the first time, turning the mood of the audience, the creation of one of the theatre’s greatest spectacles. That would have been something. Alas, I shall just have to wait. :-)