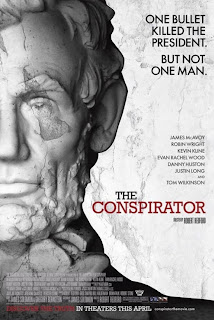 The assassination of Abraham Lincoln in April, 1865 immediately conjures up one name – John Wilkes Booth. But there were others involved, or implicated, in the conspiracy that led to this seminal event in American history. They included one woman, Mary Surratt.

I confess I had never heard of her, not until I saw The Conspirator, a historical drama directed by Robert Redford. Surratt ran a boarding house in Washington in which Booth and a group of Confederate sympathisers, including John Surratt, her son, met first to plan the kidnapping and then the murder of Lincoln along with other members of the Federal government.

Surratt was caught up in the sweep that followed the assassination in Ford’s Theatre, though her son escaped. She was eventually convicted and hanged in July 1865 as a co-conspirator, though the question just exactly how much she knew, how culpable she was, remains open, and Redford makes no attempt at closure. One of the highlights of the movie is Robin Wright’s depiction of Surratt, a perfect study in stoic ambiguity. Clearly I can’t speak with any authority on her innocence or guilt though it would seem obvious that she stood trial for her son, whose guilt was the greater. The irony is that when he was eventually caught, at a time when the initial panic and outrage had died away, he was released after a mistrial.

This is a good story which should have made for compelling cinema. Sadly it did not. I thought the script plodding and the general treatment stuffily didactic. There is simply no emotional engagement, rather odd considering the potential here. Because I’m so keen on history and courtroom drama this movie should have worked for me on so many levels. It was all the more disappointing that it did not. There was loving attention to detail, certainly, in creating the general atmosphere of the America of the 1860s but the overall effect was like a heavy pudding – bland and stodgy.

There are good performances by a first class cast. Wright, as I have said, excels as Surratt, James McAvoy is good as Fredrick Aiken, her idealistic defence counsel, slow to accept that his client has any defence at all, and Kevin Kline was superb as Edwin Stanton, the Secretary for War, who seems to have taken control of the government in the wake of Lincoln’s murder, pursuing the conspirators with a single-minded determination. But even this could not lift The Conspirator above the mundane.

The movie, in its heavy-handed manner, comes with a serious point. The trial of Surratt and the others, conducted by a military tribunal, did not just trample their constitutional rights – it ground them into the dust. If the war had been fought, to use Lincoln’s words, for a new birth of freedom this was most certainly not it. Even Aiken’s attempts to obtain a writ of habeas corpus and have Surratt tried by a civil court were frustrated by edict of President Andrew Johnson.

One would have to be blind to miss the subliminal message (Kline even bears a strong resemblance to former vice-president Dick Cheney!), that no matter how great the emergency we stamp on civil liberties, on the legal principles established by Magna Carta, at great peril. Yes, all very important, if only it could have conveyed in a fashion that feels a little less worthy, a little less like a movie made for TV. Where, oh where, was the stardust? The Conspirator is not full-blooded; it’s anaemic.