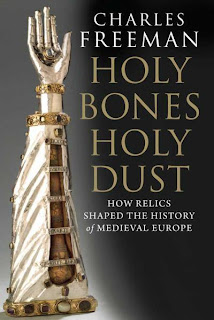 If you’ve read A Morbid Taste for Bones, Ellis Peter’s medieval murder-mystery, you will understand just how important holy relics were for any aspiring religious institution of the day, not just bones but skin, finger and toe nails, blood, hearts, anything associated with the saintly. And the trade wasn’t just in body parts. Bits of the true cross, the crown of thorns, the nails of the crucifixion, they were all there, right across the Christian world.

The thing is, you see, relics were big business; relics brought fame, fame brought pilgrims, pilgrims brought money. Where there is a demand there will always be a supply, with the suppliers not all that scrupulous or that bothered with authenticity. Saint Mary Magdalene must have been the oddest looking person who ever lived. She had eighteen arms. That’s not so bad, I suppose, because they had to be spread across five bodies!

It’s easy to smile with condescension from the sceptical heights of the present on the gullible enthusiasms of the past. But relics and the pursuit of relics was in so many ways the defining feature of medieval Christianity, both in the Catholic west and the Orthodox east. In Holy Bones, Holy Dust: How Relics Shaped the History of Medieval Europe Charles Freeman does a first-class job of putting the whole thing in proper perspective, in a fashion that is both scholarly and entertaining.

The passion for body parts defined medieval Christianity, separating it from the classical past, where pagan writers associated it with necromancy and witchcraft, or from a Judaic tradition which found the practice wholly repugnant. But for the Christians of the Middle Ages, the high noon of faith, relics were far more than objects of morbid curiosity or simple veneration; they had power, the power of the living Christ and the saints; the power to heal, the power to work all sorts of miracles.

When I was nineteen I walked with a group of friends on the Camino de Santiago across northern Spain to the cathedral of Santiago de Compostela, where the remains of Saint James the Greater, son of Zebedee, were supposedly laid to rest in the early Middle Ages. We went as curious tourists but for the millions who came before us, those who trod this way in earlier centuries, a visit to the saint was a way of lessening the burden of sin, of decreasing the time one had to spend in purgatory.

It couldn’t go on, of course. As faith waned credulity waned also, not all that surprising when one considers that Rome boasted along with the heads of Peter and Paul some of the manna from heaven, five loaves and two fishes from the feeding of the five thousand – clearly well past their use by date – and the foreskin of Jesus, the only fleshy part he left on earth. Elsewhere one could find the breast milk of the Virgin Mary in such abundance that John Calvin, the reformer, observed “Had the Virgin been a wet-nurse her whole life, or a dairy, she could not have produced more than is shown as hers.”

A lot of it is dryly amusing, the obvious fraud which must have been obvious even at the time, but Freeman tells his story without condescension. Relics are no longer fashionable, not even in the Catholic Church, but its owing to them that we can still admire splendid reliquaries or, more important, the churches and cathedrals that were built to magnify them. These bones, as Freeman suggests, shaped the Gothic, grand reliquaries of light and space.

Freeman, as all good historians should, attempts to understand the past in its own terms. In Holy Bones, Holy Dust he explorers the way in which relics played a part in past identities, in the religious experience of ordinary people, that cross-section of humanity that Chaucer brought so vividly to life on the pilgrimage to the shrine of Thomas Becket in Canterbury.

Freeman’s book is an excellent reminder that relics were once central to human identity. Once, I wrote, but pause for a moment and think. Relics, the veneration of objects, might be said never to have gone away, merely to have degenerated into a secular form. Here we are in an age where people on EBay determinedly bid for an item associated with celebrities, living or dead, things that carry no promise or power whatsoever.

I can picture in my mind’s eye the pilgrims gathered at the Tabard Inn in Southwark, ready to set out for Canterbury. I bequeath on them the miracle of foresight, the ability to look into the modern age. See how they laugh at our credulity.
Posted by Anastasia F-B at 15:39