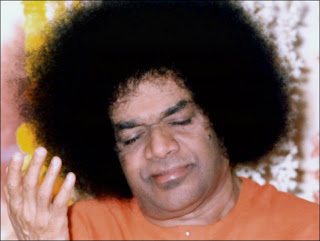 “What’s so funny?”, my partner asked, as I was overcome by a fit of the giggles. It was last Sunday morning. I was looking through the Sunday Telegraph, opening at the International News section, not usually noted for its humour. But there is was – an illustration of some Indian guru, sporting the most ridiculous Afro hairdo that I think I have ever seen. I had to put my tea down!

The story ‘God’ and the secret stash by Gethin Chamberlain concerns one Sai Baba, yet another tiresome Indian ‘holy man’, yet another fraud. He’s dead now but apparently he had a following of fifty million people worldwide when he was alive, people who paid - paid being the operative word, it would seem - for his message of ‘love and service.’ If I tell you that his followers included the risible and money-grubbing Sarah Fergusson, duchess of York, then I think you will have a fair idea of the true value of ‘love and service.’

It seems to be the old, old story: stupid and spiritually impoverished Westerners like the Daft Duchess and Goldie Hawn, a fading actress and another acolyte of Hair Man, reaching East for supposed spiritual richness. And what do they discover? Why, a laughable phoney, busy soaking the rich, and busy, it now appears, sexually molesting his younger followers, deluding everybody by passing off cheap trickery as miracles.

No sooner had the bogus Baba entered another state of incarnation – a snake, probably – than the rumours started to spread. He has an ashram in the town of Puttaparthi in Andhra Pradesh, within which there is a personal lair, a dragon’s cave, locked away since his death in March. Well, giving way to popular demand, it’s now been opened. And what was found therein, a new wave of enlightenment, perhaps, a revelation from beyond the grave? No, just loot, lots of loot.

Like Fafner, the old Baba was sitting on a horde, in a room stacked with gold, diamonds and cash. Apparently the haul amounts to some £1.6million in rupees, 98kg of gold and 307kg of silver. I don’t expect the Nibelung haul was half so valuable! Apparently there are good grounds for believing that there is even more, secreted away elsewhere, treasure sent by his many followers in the belief that it would help in spreading the message of ‘love and service.’ The police intercepted members of the Baba’s Sathya Sai Central Trust driving away with the equivalent of £50,000 in cash. It was to pay for a memorial, they said.

It’s not just the fraud that amuses me it’s the awful vulgarity of the whole thing, the vulgarity of the living Baba. When he and his hair occupied this mortal plain as many as 10,000 people would crowd into the ashram’s central hall, a gaudy palace in white and blue décor, replete with golden lions and chandeliers. One look at this and I would have been off! But, no; in they came, cricketers, Bollywood stars, politicians and the duchess of York, herself something of an expert in downmarket vulgarity.

I don’t suppose there will ever be an end to this kind of nonsense in a world where people are rich in goods but poor in sense. One Baba goes and another Baba comes. For every wise person there are ten thousand fools, waiting to be gobbled up by the dragon. We only have one existence, one life. Celebrate it as it is in all of its carnate imperfections, and tell the Babas to bugger off, peace, service, ashram, golden lions and all
Posted by Anastasia F-B at 15:50