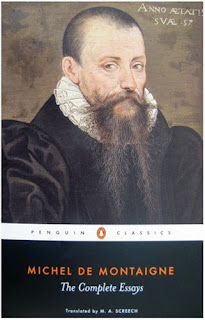 I’m in the process of reading The Complete Essays of Michel Montaigne, a labour worthy of Hercules. Please don’t misunderstand me; if it’s a labour it’s a hugely entertaining one. I’ve read some of his essays before though in a highly abridged edition. The full collection weighs in at thirteen hundred pages, full of all sorts of surprises and delights.

Montaigne is the father of the essay as a literary form. In so many ways his own personal technique, his assaying has never been bettered in style, range or content. I’ve not long finished On Democritus and Heraclitus, where he says of himself:

I take the first subject that Fortune offers: all are equally good for me. I never plan to expand them in full for I do not see the whole of anything: neither do those who promise to help us to do so! Everything has a hundred parts and a hundred faces: I take one of them and sometimes just touch it with the tip of my tongue or my fingertips, and sometimes I pinch it to the bone. I jab into it, not as wide but as deep as I can; and I often prefer to catch it from some unusual angle. I might even have ventured to make a fundamental study if I did not know myself better. Scattering broadcast a word here, a word there, examples ripped from their contexts, unusual ones, with no plan and no promises, I am under no obligation to make a good job of it nor even stick to the subject myself without varying it should it so please me; I can surrender to doubt and uncertainty and to my master-form, which is ignorance.

It’s just so brilliantly put, this technique of playful serendipity, the one I try myself with a fraction of the skill or the insight. There is not the least artifice in the way that Montaigne looks at things, though there is a slight tendency to self-deprecating understatement. He is the subject of his book, and spending a little leisure in pursuit of the subject is neither frivolous nor vain, as he himself suggests!

Montaigne also has a quality I admire most in a writer: a simple love of words. In introducing On the Vanity of Words, the essay that follows on from the above, the editor says that, despite the author’s mastery of language, he despised words and admired deeds. But that seems to me not to be a wholly accurate reading; for, drawing on classical examples, what he really despises is rhetoric, and rhetoric here is the worst kind of artifice; an abuse of words, an abuse of meaning and an abuse of language. Montaigne does give examples of bad usage, particularly in overblown technical terms, but he does so in words that are anything but vain. In other words, he disproves his own argument, or he proves the subtle irony of his intellect.

On Democritus and Heraclitus has another passage that I particularly like:

Vain, daft, inane and despicable, watching the news night after night, discovering the latest antics of some politician or celebrity, it’s a conclusion that is almost impossible to escape.
Posted by Anastasia F-B at 16:19