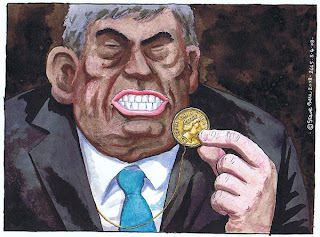 We haven’t heard much from Gordon Brown, our late, unlamented, prime minister, the man who bankrupted Britain, since he was ejected from Downing Street with as much lack of personal dignity as the scheming and the treachery that took him there in the first place. But we heard from him last week, the raging bull, raging in Parliament, attacking Rupert Murdoch’s News International as a “criminal media nexus” engaging on “law breaking on an industrial scale.” On he fumed about ‘rats’ and ‘sewers’ and the like.

This had nothing to do with the phone hacking fuss that saw the demise last week of the News of the World, though he certainly drew on that for additional ammunition. It was brought on, rather, for altogether more personal reasons.

In 2006 the Sun, another horse in the Murdoch stable, improperly, according to Brown, accessed the medical records of his son, Fraser, revealing that he suffered from cystic fibrosis. The odd thing is that it’s taken five years for this to come out, and clearly just at the right moment, to inflict even more damage on News International. In the court of public opinion the shout went up “How awful!”, “How awful!” David Cameron even offered the former PM his sympathies.

Oh, it’s awful alright, but not for the reasons you may suppose. Of all the hypocrisy and hand-wringing that has been demonstrated over the past week in the wake of the News International scandal Brown’s is by far the worst. Let me put it plainly: he used his son, his own son, as part of an act of the basest political vengeance. If there are rats, he is the biggest; if there are sewers, his is the deepest.

The publication of this story did nothing at all to sour Brown’s relationship with Rupert Murdoch or News International. The first interview that he gave after becoming Prime Minister in 2007 was with a Sun journalist. Rebekah Brook, the former News International chief executive, was editor of the Sun at the time of the cystic fibrosis story, though that did not stop her coming to Downing Street as a personal guest of Sarah Brown. Moreover, it did not stop the Browns attending her wedding in 2009.

The real reason for the rupture has nothing to do with medical records and phone hacking. No, the real reason is the Sun, the newspaper that supposedly ‘delivers’ the outcome of British parliamentary elections, abandoned Labour in support of the Tories prior to the election of 2010. Brown, noted for his rages, noted as the Mad Mrs Rochester of the Downing Street attic, rang Rupert Murdoch saying that “I will destroy you.” That’s what it’s all about: petty spite and vengeance. At once my sympathies switched to Murdoch. I simply cannot stomach hypocrisy seasoned by treachery, treachery, moreover, by a kind of vicious Holy Willy, a canting Presbyterian Scot.

Let’s look a little more closely at the sewer and the rat. Brown expresses contempt for the techniques employed by News International. But this is a man who, when the phone hacking allegations first emerged in 2009, refused to set up an inquiry. He now says that his efforts to do so were obstructed by Sir Gus O’ Donnell, the Cabinet Secretary. That’s an outright lie, as the good knight has since confirmed.

It get’s worse. The moral tone of Gordon Brown’s sewer-like premiership was set by political thugs like Charlie Whelan and Damian McBride. The altogether loathsome Damian McBride served as a special advisor on Brown’s staff until 2009, when he was caught trying to disseminate lies about opposition politicians, lies that did not stop short of embracing one MP’s wife. The emails in question were issued from Downing Street. It was a culture of political poison that makes News International look almost amateurish.

I’m sure Dante would have found a special place in the Inferno for Gordon Brown. Yes, of course, the Eighth Circle, that dedicated to the treacherous and the fraudulent. It’s there, specifically in the sixth section, where the hypocrites are to be found, weighed down forever by gilded lead cloaks, representing the reality behind the appearance of their words and actions in life.

Woe unto you, scribes and Pharisees, hypocrites! for ye are like unto whited sepulchres, which indeed appear beautiful outward, but are within full of dead men's bones, and of all uncleanness.
Posted by Anastasia F-B at 15:40