History in a Charter 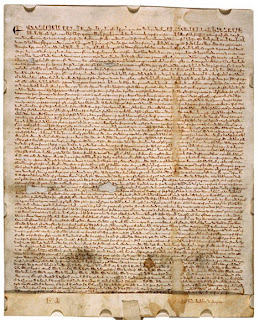 There is a scene in Raiders of the Lost Ark where Indian Jones, in a bluff, threatens to blow up the Ark of the Covenant, captured by the Nazis. The bluff is called by Dr René Belloq, a French archaeologist in the pay of the Germans, who says “Yes, blow it up! Blow it back to God. All your life has been spent in search of archaeological relics. Inside the Ark are treasures beyond your wildest aspirations. You want to see it open as well as I. Indiana, we are simply passing through history. This...this is history.”

I remembered this on reading that the City of London’s copy of Magna Carta was recently returned to the Guildhall from the Metropolitan Archives in Clerkenwell, where it has been resting for the past five years while the strong-room in which it is normally kept was being renovated. We are simply passing through history; Magna Carta is history.

London’s copy is not one of the four extant originals signed by a reluctant King John at Runnymede in the summer of 1215. It’s a later version, authorised by Edward I, John’s grandson, in 1297, though it has the distinction of being the best preserved, the one that is consulted by Parliament when its clauses become relevant.

According to an article I read in the Times it’s valued at £20million, an entirely nominal figure because it will never be sold, could never be sold. Magna Carta is literally priceless. At the Guildhall itself it is not normally on view, being kept secure behind fire doors with an eight hour resistance. The only other danger it faces is from insects, which could consume the thirteenth century vellum. To guard against this those who care for it carry out regular ‘bug hunts’, to use their own expression.

Magna Carta itself is better known for its principles than its contents, a good bit of which is concerned with the property-rights of the thirteenth century aristocracy. Unlike, say, the American Declaration of Independence, which takes it as one of its cues, the language is dry and legalistic rather than poetic and inspirational.

Dry it may be but it is still the basis of so much that we have come to value as central to our liberties. It was the first serious attempt to limit the power of the executive, the first attempt to determine that monarchs were also subject to the law. Most important of all, though this was never the intent, it is a kind of constitution, a prototype for all that followed across the Anglo-Saxon world.

Take chapter 29, still the best known and by far the most relevant: “No freeman shall be taken or imprisoned or disseised [deprived of property] or exiled or in any way destroyed…except by lawful judgement of his peers or by the law of the land.” In these few words, as the historian David Starkey wrote, lies the kernel of the three great legal freedoms: the rule of law, the security of property and the right to trial by jury.

There is also something even more fundamental in elementary notions of political freedom, a balance of rights and duties. In the reissue of the Charter by Henry III in 1225 it is recorded that the liberties had been given by the crown in return for a grant of taxation. Such grants were to become the prerogative of Parliament, the basis for still further compromises and concessions.

No taxation without representation, the political battle-cry of the American Revolution, stems from the principles that Magna Carta introduced to the world. It is a document that should be cherished, one that shows the enlightenment of medieval barons compared with the thugs and tyrants who control so much of the modern world, individuals and oligarchs who are governed by no law but their own.
Posted by Anastasia F-B at 15:38