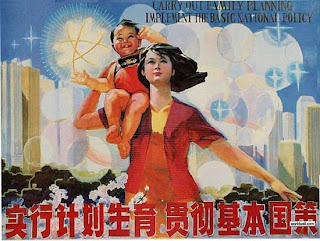 It’s over thirty years since China adopted its one-child only policy, a draconian measure designed to cope with the perceived problem of overpopulation. But the agrarian China of 1979, not long emerged from the nightmare of Mao, is a very different place from the high-tech China of today.

High fertility rates are most often a consequence of poverty, not wealth. Economic modernisation and the growth in personal wealth have the effect of reducing the number of children people have anyway, without the need for state intervention, which almost invariably has the effect of making things worse, or creating new and unintended problems.

China is facing a demographic crisis alright, but not the kind originally anticipated. It’s not that it has too many people: it now has too few of the right kind of people; there are too few young people to carry the future burden that has been placed on their shoulders. China, in other words, is growing old.

But the crisis, or the potential crisis, goes still deeper. Despite over sixty years of Communist rule, China is a nation wedded deeply to tradition, to a tradition that places a far greater importance on male over female children. No male child means that a long chain with the past is broken, that the family name disappears, that one’s ancestors have been consigned to a deeper oblivion.

When preference, and politics, meets with technology, when tradition meets the ultrasound, the outcome is depressingly predictable: female foetuses are aborted until nature gets it ‘right.’ In the more heavily populated eastern provinces of the country, places where the one-child policy is imposed with all the rigour at the disposal of officialdom (forced abortions, even at a late stage of gestation, and the confiscation of ‘illegal’ children were routinely deployed at one time) the ratio of male to female children is now shockingly out of balance.

This femicide is bad enough in itself but it means that there are thousands of males born in China today who will never find a partner. And as problems tend to be built on problems there is evidence that girls are being kidnapped for forced marriages.

There is also the issue of corruption, a huge problem in a country with a political system fearful of any kind of popular scrutiny. According to Caixin, the Beijing-based news agency, surplus children were routinely taken into orphanages, there to be sold on to foreign parents at a price up to $5000 a head, with kickbacks to the bureaucrats involved.

Reporting on this whole issue recently, a leader in the Economist made the point that demography is like a super tanker; it takes decades to turn around. If change is to come it has to come soon. But with the Chinese gerontocracy tied to the one-child policy as an act of political faith it’s difficult to see how the country can escape a creeping catastrophe.
Posted by Anastasia F-B at 15:55