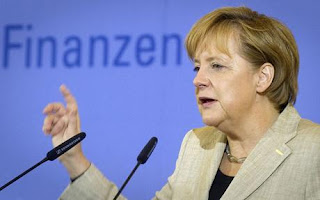 Be assured: the crisis is over. The smug smiles said it all, as the European leaders emerged from the end of last week’s summit on the euro debt disaster. They emerged bearing gifts to the Greeks, a second bail-out of the profligate nation worth over $130billion. The details are all a bit vague, though; who, exactly, is going to pay what? Never mind that. Rejoice; the crisis is over; the euro lives; the European ideal lives. The crisis is over…until the next time.

I have only one thing to say: keep a close eye on Angela Merkel, the German Chancellor. That smile is, I predict, set to freeze before her mouth turns down at the edges. She seems to have become the architect of a new old Young Plan, with Germany set to pay foreigners subsidies far into the future, just to preserve an economic absurdity, that and the political credibility of Nicholas Sarkozy, the French president, an even greater absurdity.

The Young Plan, if you are unaware of the history here, was a scheme, devised by an American banker in 1929, to regularise the reparations payments imposed on Germany as part of the Treaty of Versailles at the end of the First World War. It was supposed to make them more manageable by spreading them out over time, a period of sixty years to be exact. It upset quite a few people then; it should upset people now: for once again Germany’s future has been mortgaged.

There are no reparations, of course, in the brave new fraternal Europe, just the internationalisation of national debts. A ‘joint liability’ it’s being called, as the Greek sovereign debt is swallowed whole along with Greek sovereignty. It’s really a German liability, something I’ll come to in a moment, but first consider inglorious Greece.

The mountains look on Marathon--
And Marathon looks on the sea;
And musing there an hour alone,
I dream'd that Greece might yet be free
For, standing on the Persians' grave,
I could not deem myself a slave.

So wrote Lord Byron in a mood of romantic reverie, dreaming of the ideal of Greece. Another poet, perhaps a Greek one (do the Greeks write poetry anymore?), may soon express a similar sentiment as Europa, or the bull, stands on the grave of this country, a country that for centuries fought the Turks for freedom only, in the end, to give that freedom to the Germans.

Why, oh why do the Germans want this? It will be German taxpayers, principally, who will pay, Young-plan style, for the acquisition of Greek bad debts. They have gained nothing by this fraud other than a greater personal burden, their future for a dubious Greek present, for an even more dubious currency, based on ideology not fiscal realism, a currency that even the Bulgarians (for the love of God – the Bulgarians!) are shying away from.

No matter, I feel sure that the pensioners of the Fatherland, many of whom survive on no more than 1000 Euros a month, think it all worthwhile; think that it is a jolly good thing that their Greek equivalents, who retire more than ten years earlier, receive more than twice as much.

The reality is that the problem of Greek solvency has not been addressed; it’s being hidden behind back-slapping and cheesy grins, all part of a kind of political medicine show. There is no long-term plan for dealing with the economic fecklessness of the Greeks, just a faster and faster bail-out of a decrepit old trireme, sinking by perceptible stages.

Merkel, contrary to past assurances, contrary to the law of her own country, has bought Greek debt to saddle on German taxpayers; more moussaka, less sauerkraut. The cheque’s been signed, the deal has been done. The Germans can boot this woman out of office but she has bequeathed to them of legacy that makes Young look benign.
Posted by Anastasia F-B at 15:43