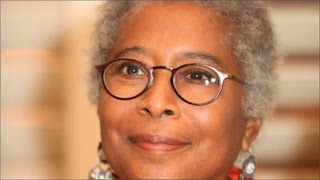 Alice Walker walks in a higher plain: she walks with Gandhi; she walks with Martin Luther King; she even walks with Jesus. She drips with compassion for all children, “humanity’s most precious resource”, to use her own words, though she can’t even manage a human relationship with her own child, Rebecca, who has said that she felt “more of a political symbol that a cherished daughter.” Shades, I think of Charles Dickens’ Mrs Jellyby from Bleak House, as another blogger noted. Like Mrs Jellyby, the “telescopic philanthropist”, Alice Walker is a prig; a sanctimonious, preaching, hypocrite. Worst of all she is a self-important, self-regarding fool.

So, what’s brought this on? I should say that I had little interest at all in this woman, the avatar of the second rate, grossly inflated beyond all proportion, famous for being famous, an individual whose talent stands in inverse proportion to the size of her mouth.

She is not a writer for whom I have any respect, representing all that is cankerous in modern liberalism, exposed so brilliantly by Nick Cohn in his book What’s Left?: How Liberals Lost Their Way. I would continued to have ignored her but for the fact that she decided to join the so-called Freedom Flotilla 2, an act of political agitprop by the murderers of Hamas, supposedly intended to end the Israeli blockade of Gaza. She has not the first clue over the true objectives.

I recently wrote Eyeless to Gaza, an article published on BrooWaha, the online newspaper, drawing attention to the political realities behind Freedom Flotilla 2, an armada made up partially of the malicious and partially of the moronic. I made it plain that this is an ‘aid’ convoy that carries no aid. What it does carry is a lot of left-liberals, useful idiots, as Lenin is once supposed to have described such people. Of Walker specifically this is what I said;

The useful idiots, incidentally, include Alice Walker, the American writer, who has joined the flotilla, saying she is concerned about ‘the children.’ Perhaps she might have considered talking with Khaled Abu Toameh, an Israeli-Arab journalist, who has actually spoken to ordinary Palestinian people, as opposed to the publicists of Hamas. If she did she would have discovered that there is no shortage of food and that shortages of medicine are caused by infighting between Fata and Hamas. The latest news from the Gaza Strip itself confirms this, officials blaming Fata for “political blackmail”

I really don’t see this woman now talking to anyone, or being able to make any sense of what’s being said to her. Prior to sailing with the pompously named Audacity of Hope - thankfully now ‘becalmed’ in Greek waters along with the rest of the diminishing armada - she issued a statement so sanctimonious that people watching her at the press conference could not possible have missed her halo;

I see children, all children, as humanity’s most precious resource, because it will be to them that the care of the planet will always be left. One child must never be set above another, even in casual conversation. Not to mention in speeches that circle the globe…we must do everything in our power to cease the behaviour that makes children everywhere feel afraid… So, Gazans, and especially the children, we are on our way. We are coming. We hear you. We are coming

And on that note she floated away. Actually I’m surprised she needed a ship at all. Surely the waters would part before this modern Grandma Moses as the Red Sea parted before, well, Moses!

They are coming alright, or rather they are not, which is probably as great a relief to the people of Gaza, spared this woman’s oleaginous embrace. The ocean of compassion, incidentally, does not extend to the children of southern Israel, for all Walker’s maudlin mawkishness, children whose homes have come under attack by Hamas rockets. These terrorists, moreover, with no qualms at all, hide the launch sites in civilian areas, effectively using Palestinian children as a shield. Does Grandma know?

Howard Jacobson, a prize winning British author, wrote an excellent expose of Walker in all her laughable hypocrisy. Beyond highly charged emotionalism the woman gave not a single valid reason for joining the flotilla, for wanting to end a blockade absolutely necessary to prevent the terrorists who control Gaza from getting hold of more weapons.

One would have to be a complete fool not to see through Walker’s partiality, to see through all her tendentious colour purple (oops!) prose. Alice Walker comes in peace, with the side possibility of wished-for martyrdom (but who would dare assault a ship carrying Grandma Moses?). If the Israeli military attacks, she said, it will be as if they attacked the mailman. Let there be some Jacobsen light;

Wrong on a thousand counts. As a writer, Alice Walker must understand the symbolic significance of words. The cargo is a cargo of intention. It is freighted with political sympathy and attitude. It means to blunder into where it isn't safe, clothed in the make-believe garments of the unworldly, speaking of children and speaking like children, half inviting a violence which can then be presented as a slaughter of the innocents.

Even before the deed, Alice Walker has her language of outraged moral purity prepared -- "but if they insist on attacking us, wounding us, even murdering us..." The Israeli response is thus already an act of unprovoked murder, no matter that the flotilla is by its very essence a provocation. Whatever its cargo, by luring the Israeli military into action which can be represented as brutal, the flotilla is engaged in an entirely political act. To call it by any other name is the grossest hypocrisy.

Meanwhile Grandma cools her heels in Greek waters with the other useless idiots as this gesture begins to look more farcical by the day. The Israeli government has behaved brilliantly in becalming the armada politically, something even the Guardian has been obliged to admit. Even the IHH, the terrorist front based in Turkey, has withdrawn support, because of ‘technical problems.’ In point of fact it’s because the Turkish government is anxious to restore its previously good relations with Israel, disrupted by last year’s flotilla.

So Walker sits still, I assume, audaciously hoping on the Audacity of Hope. She might be moved to entertain the others with a rousing spiritual or two. Or perhaps not, just in case the waters of the Aegean are not quite as obliging as those of the Red Sea.
Posted by Anastasia F-B at 15:50