Mirror, mirror on the wall 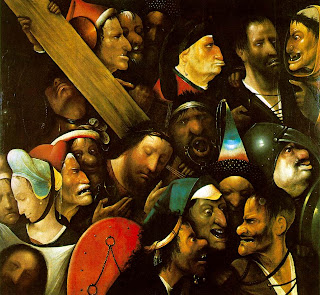 The best artists are those who offer new ways of seeing and the best pictures are those which offer themselves as a challenge. Hieronymus Bosch died in 1516 but his art still seems astonishingly modern to me, as bitingly satirical in its own way as the paintings of George Grosz in the twentieth century, rather a paradox considering that his style was late Gothic, untouched by the new fashions which had emerged out of Renaissance Italy. Bosch is a Pre-Raphaelite before the Pre-Raphaelites!

Like Grosz, Bosch looked on the world with a bitterly cynical eye. The two men could not be further apart - Grosz the left-wing chronicler of Germany after the First World War; Bosch a Christian pessimist troubled by the apparent ascendency of evil, a theme he touches on time after time.

I have before me a print of Christ Carrying the Cross, a painting in the collection of the Museum voor Schone Kunsten in the Belgian city of Ghent. It’s an extraordinary piece of work, touching on a very ordinary theme in late medieval art. I simply can’t look at this in a detached frame of mind, or look with equanimity at the ugly throng through which Christ and the two thieves make their collective way to Calvary, suffering and death.

The suffering has already begun, the devils already at work in taunting and mockery. There, on the right-hand side, are the two thieves. At the bottom is the bad thief, turning on his tormentors in defiance, ugliness returned for ugliness. At the top the good thief, sneered at by a particularly vicious looking friar, already looks corpse-like in hopeless resignation.

In the middle of this human storm, and in the middle of the painting, is Christ with his cross, a little like the eye in calm serenity, ignoring all of the malevolence, deeply introspective, the only sign of emotion being a single tear forming on his lower lashes. His serenity is mirrored in that of Saint Veronica on the bottom left, looking down at the veil which she has given Christ to wipe his brow, the cloth now showing an imprint of his face.

The noteworthy thing about the crowd, friar and all, is that it is not Biblical, at least not so far as dress. These are the people of sixteenth century Flanders, people the artist would have been familiar with: merchants, clerics, soldiers, some prosperous burghers of the day, judging by their headgear and general apparel. The figure to the right-hand side of the good thief even looks like a Duke of Burgundy.

Bosch was a Catholic and this work, thought to have been painted some time after 1500, possibly on the threshold of the Reformation, is an act of faith in a time of uncertainty. But what is it saying, exactly? Is there a message in that malevolent friar, I wonder? He, representing a mendicant order, an order given to charity, is the most malign among the crowd, teeth like fangs, his face showing no grace or Christian mercy whatsoever. Why put a friar in a picture that lifts him out of his own history and places him among the first century Jews of Palestine? Is this an observation on the state of the Catholic Church, the church of those monster popes Alexander VI and Julius II? These are just questions. I don’t have any answers.

This is a dark painting, pessimistic in outlook. There is no humanism here, the intellectual fashion of the day, and precious little humanity. Simon of Cyrene is present, certainly, the man who helped Christ carry his burden, but he, looking upwards, is cast into the shadows under the Cross. Then there is the blind side, the fourth wall, occupied across the ages by other spectators, shifting members of that crowd, people like me and like you. Do we participate? Are we, too, among the mockers? Is this a mirror?

Michael Prodger, writing some weeks ago about this painting in the Spectator, points out that Carl Jung, the psycho-analyst, claimed Bosch as an early discoverer of the unconscious. In fact Jung is not the first to make such a claim, even though the terms used were different.

José de Sigüenza, a Spanish historian and theologian born later in the same century that Bosch died, wrote of him that “The difference between the work of Bosch and that of other painters lies in the fact that the others depict man as he appears on the outside. Only Bosch dared to paint him on the inside.” Look, see; it’s not a very comfortable suggestion.
Posted by Anastasia F-B at 16:32