The Decline and Fall of the News of the Screws 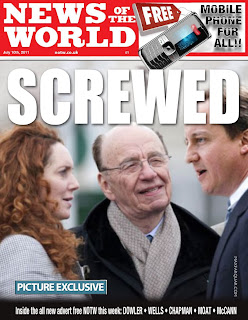 It is Sunday afternoon, preferably before the war. The wife is already asleep in the armchair, and the children have been sent out for a nice long walk. You put your feet up on the sofa, settle your spectacles on your nose, and open the News of the World. Roast beef and Yorkshire, or roast pork and apple sauce, followed up by suet pudding and driven home, as it were, by a cup of mahogany-brown tea, have put you in just the right mood. Your pipe is drawing sweetly, the sofa cushions are soft underneath you, the fire is well alight, the air is warm and stagnant. In these blissful circumstances, what is it that you want to read about?

Yes, what is it you want to read about? Murder, George Orwell proceeds; for this is the opening paragraph of the Decline of the English Murder, an essay published over sixty years ago. What we have been reading about over the past week is the decline – and fall – of an English newspaper, the News of the World, the one the author mentions in his opening, for so long something of a national institution.

British people will know all there is to know about this downmarket publication. If I tell those of you who are not from these islands that this newspaper is known colloquially as the News of the Screws then you may get a flavour of its style and content. Murder was certainly a favoured topic, as was sex, sex and more sex, scandals of any kind, especially those involving the great and the not so good. For the long time it has been the best selling Sunday newspaper in England, at one point having a print run greater than any other newspaper in the world. Not any longer. Today it closed and closed for good. There will be no more news of the screws.

The paper, established in 1843, has been part of Rupert Murdoch’s media empire since 1969. It’s also long been a kind of vox populi - the peoples’ voice – loud and harsh, certainly, but going in for a fearless – and ruthless – exposure of the hot topics of the day. News reporting was part of its make up, but as the world of publishing became ever more cutthroat, as the pressure to be the first to get hold of the story became ever more intense, it could not resist a certain amount of news creation.

Still, the mass readership lapped it up, Sunday after Sunday, the more salacious the story the better. In order to keep its edge the paper took to hacking into the phones of public figures. There is no news here; this practice was uncovered some time ago, the occasion for an ongoing scandal and undisclosed payments to those whose privacy was attacked in such an unscrupulous and underhand fashion.

I would guess that most of the readership did not care that much that their favourite Sunday read was behaving in such an unethical manner. They may love celebrities, they may love to read about celebrities, but this comes with quite a high degree of prurience, jealousy and petty-minded resentment.

Celebrities are the new aristocracy. If the peasants defer to them they also dislike them; they are more than happy to see them fall on their faces. So, who cares if their phones are hacked, who cares if their latest peccadilloes are exposed? Those who live by publicity shall die by publicity. The News of the World has spoken; the News of the World is the voice of the people.

Alas, the journalists hacked several phones too many; they started to hack the phones of the people. The people here included Milly Dowler, a murdered schoolgirl; they included the families of those killed in the 7/7 suicide attacks in London; they included the phones of the relatives of soldiers killed on active service. It all came out last week. At once the mood turned. At once a tsunami of national disgust overwhelmed News International, the company that publishes the News of the World and several other Murdoch papers.

The peasants rose. But this is the modern world; there are no more pitchforks and torches. Instead the masses took to Facebook and Twitter in their attempts to undermine the Bastille. Advertisers, the chief source of any newspaper’s income, were put under pressure. Accounts were closed, first a trickle, then a flood.

The pressure was too great. Last Thursday James Murdoch, son of Rupert, announced that the News of the World, carrying no adverts, would publish its final edition on Sunday, with the loss of some two hundred jobs. It’s really an exercise in damage limitation. Not only was the scandal no longer sustainable but it also had the potential to impact on the corporation’s wider interests, including its ongoing attempt to gain a controlling interest in British Sky Broadcasting, the largest subscription television service in the United Kingdom.

I have mixed feelings here. I never read the News of the World; the kind of story it carried carried no interest for me. I think the editors behaved deplorably over phone hacking, a gross breach of privacy which has done so much damage to the credibility of the press. But I also think that the journalists are victims. If some of them behaved badly I have no doubt that this was a result of a bad corporate culture, one where the Murdochs set the mood.

And then there is the people, those who cheered at one moment and howled at the next. I’m not keen on internet flash mobs but I’m even less keen on hypocrisy. It was the public that demanded the kind of story that kept the News of the World on edge, always seeking to maintain or increase its circulation. Cheering or howling, there is nothing more contemptible than a mob, particularly in a mood of self-righteous indignation.
Posted by Anastasia F-B at 16:12