The Shaming of England 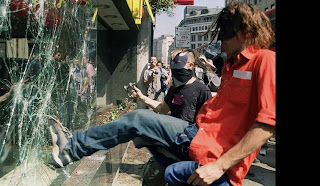 One other circumstance is worthy of remark; and that is, that from the moment of their first outbreak…every symptom of order or preconceived arrangement among them, vanished. When they divided into parties and ran to different quarters of the town, it was on the spontaneous suggestion of the moment. Each party swelled as it went along, like rivers as they roll towards the sea; new leaders sprang up as they were wanted, disappeared when the necessity was over, and reappeared at the next crisis. Each tumult took shape and form, from the circumstances of the moment…in a word a moral plague ran through the city. The noise, and hurry, and excitement, had for hundreds and hundreds an attraction they had no firmness to resist. The contagion spread, like a dread river: an infectious madness, as yet not near its height, seized on new victims every hour, and society began to tremble at their ravings.

The savagery of 1780 was brought on by a wave of anti-Catholic hysteria, but this kind of thing really requires no motive; disorder, violence and the ugliness of the mob becomes an end in itself; it became an end in itself last week in London and other English cities, as a Twitter contagion spread across the land, shaming it in the eyes of the world.

The thing that outraged me most about this outrage was the way that it was wilfully misinterpreted, a serious news story draped in an ideological fog, balderdash about deprivation and cuts. I wrote Shopping with Violence, my previous article, as a rapid corrective to misinformation. I also wrote it, I freely confess, in a mood of acute anger. But I had no time to stand and stare; I had to react, a little attempt to ensure that a lie was not swallowed as the truth.

Now I have had time to think, and I’ve been thinking hard ever since, talking to friends and contacts over the weekend, including some journalists I know. I’m no less angry but a lot more focused. There is now some additional information that I would like to share. So, let me take you by the hand and lead you through the streets of London; I’ll show you something that’s bound to shake your mind.

Let me begin by telling you a tale of two cities, of two lives about as far apart as is possible to imagine. My first is an 89-year-old man by the name of Aaron Biber, a barber who has been cutting hair in Tottenham, the district where the riots started, for over forty years. His shop, a one-man business, was trashed; his equipment, such as it was, taken, even his kettle. “I will probably have to close because I haven’t got the insurance and can’t afford the repairs”, he said afterwards.

My second is Laura Johnson, a 19-year-old student. She does not live in Tottenham, oh, no; she is the daughter of a millionaire whose gated home, complete with tennis court, is in opulent Orpington. What on earth is the relevance of this spoiled little rich girl to the story of Biber the Barber? Simply this: he is a victim of a riot; she is an alleged rioter. She has been charged with driving away in a car containing stolen televisions, mobile phones, cigarettes and alcohol, all at an estimated value of $8000. Is if fair to ask if daddy was keeping her short in her allowance? Was she a victim of the government’s heartless cuts? Was she outraged by the condition of the hungry proletariat? I’ll leave you to make up your own minds.

It goes on like this, the stories go on like this, stories of little people whose lives and businesses have been blighted by a venal mob, out to take what they could, and what they could not take they destroyed. I mentioned in my previous article an injured man, robbed as he was helped to his feet, an incident filmed and posted on YouTube. I now know that his name is Asyraf Rossli, a 20-year old student from Malaysia, here on a visit. He has now become a symbol for the riot, a living indictment of the sub-human brutes that broke his jaw and took his things.

He is one symbol. Another is Chelsea Ives, an 18-year-old who was seen hurling bricks at the police. She also stands accused of leading an attack on a mobile phone store. This woman, who previously had been selected as an ambassador to promote the London Olympics because of her sporting abilities, later boasted that she had had “the best day ever.” Unfortunately for her she was spotted by her own mother, who, in a mood of disgust, reported the incident to the police. Ives has now been remanded in custody.

Now I’m going to take you further north, out of London to the city of Birmingham, where the disorder spread in Twitter copy-cat fashion. There 21-year-old Haroon Jahan was killed after a suspected looter drove a car directly at him and his two brothers as they attempted to defend shops, mosques and businesses from the contagion. As justifiable anger overtook the Muslim community, his father, Tariq, with incredible nobility of spirit, prevented an even greater evil:

I have no grievance against anyone, especially the guy who ran his car into my son. I don’t feel anger. What he did I leave in the hands of the Lord to punish him the way he wants. I have nothing to do with that. I don’t blame the police; their hands are tied by the Government. I don’t blame the Government; they can’t control the kids. They can’t stop everyone; there are more public that there are police.

I have a grievance alright; I feel anger and sadness on Mister Jahan’s behalf. I also feel anger and sadness at the fate of 68-year-old Richard Mannington Bowes, a pensioner from Ealing in London, who was beaten unconscious by a group of youths after he tried to stop them setting fire to large rubbish bins across the green from his apartment. Police were held back from reaching him by a mob throwing bricks and chunks of paving slabs. Mister Mannington Bowles died after three days on a life support machine.

I took part recently in a discussion thread on Blog Catalogue, a multi-author forum, concerning Another Brick in the Wall, a song by Pink Floyd, an old British rock band. “We don’t need no education”, they sing self-refutingly. The mobs in London, Birmingham and elsewhere do not have no education, I would guess, and do not want no education. But they certainly needed those bricks in the wall, to loot and to maim. There is a sickness in this land, the sickness of people who care for nothing but themselves and their own vile appetites, the sickness of those who would look for political purpose in murder and mayhem, people like Ken Livingstone the former mayor of London, a man whose brains are more addled than most.

Whatever the outcome of these August days, this summer in the city, I sincerely hope there is no repetition of the mealy-mouthed, hand-wringing liberalism that saw previous disorders given a kind of retrospective justification, which saw millions of pounds of public money wasted on wasters. I sincerely hope that you, who may not know this country, are not deceived by attempts at a political whitewash. I hope you understand that hooliganism is no more than hooliganism, theft no more than theft and that violence, for some, simply carries its own vicarious pleasures.

England was shamed last week but I would like to finish on the upbeat. There has been a huge upsurge in support for the police, a community counter-reaction against thuggery. There has been a popular surge in support for Mister Biber, an online campaign called Keep Aaron Cutting set up on his behalf. So far over $45,000 has been pledged. Aaron will keep cutting. London and England will keep cutting too; the world expects no less.