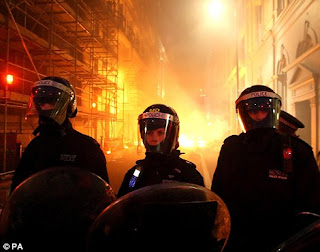 This I a slightly amended version of an article I wrote for Broowaha.

I want to say a word or two about the riots in London, my city, my home. My view is that - as with the Norwegian massacre - it is best to stand back from such events before forming a definite judgement, simply to allow the facts to settle. But judgements are already being formed which have nothing whatsoever to do with facts and everything to do with politics. The suggestion is that these events, which have disgraced my country and its capital in the eyes of the world, are somehow to do with cutbacks. This is no more than a supposition, based not on evidence but wishful thinking.

The opportunity has also been taken to attack the police, that somehow they do not respect the 'right to peaceful protest,' an assertion that again is utterly at variance with the facts. No it's more; it's an outright lie, one that is clearly intended to give a completely wrong impression to people who know little of the Metropolitan Police, who know little of London and little of this country. If anything the police have gone too far in the opposite direction, a softly softly approach that sometimes makes the force look fumbling and weak, an approach that saw them lose control at the weekend

To try to play politics at time like this really is appalling. The present government of David Cameron has been in power for just over a year, inheriting a massive and unsupportable debt from the previous administration. There was no alternative to serious fiscal retrenchment, but the cuts, such as they are, have not yet had an impact. No, people are not starving in the streets while capitalist fat cats sit back complacently smoking Havana cigars. I would simply ask you to see this Marxist fantasy for the risible nonsense it truly is.

Simply put these riots are anarchy for the sake of anarchy, not for politics, disorder as an end in itself. Who are the targets? The bastions of capitalism, perhaps, the banks and the stock exchange? No, ordinary traders, little shopkeepers, who have seen their stores looted and their livelihoods destroyed. Workers of the world unite; you have DVDs and a couple of video games to gain, to say nothing of shoes and sofas.

So what is the truth? Rarely pure and never simple, perhaps? Pure and simple for some, that much is obvious. The reality is we are dealing with a hijack here. What started as a peaceful vigil over the shooting of a man called Mark Duggan (leader of a drug gang, incidentally) in the district of Tottenham was quickly taken over by those who had never heard of him and had no interest at all in making a political point. A great many involved in this Twitter riot (yes, that's the medium) are teenagers. One, a fifteen year old, was caught on camera, saying that it was 'fun.' Commenting on this Richard Evans, who edits an online news forum, said;

Make no mistake, they're not crusaders on some just cause, most of them don't even have a point to make, these are morons acting like morons — nothing more, nothing less. It must actually be insulting to Mark Duggan's family and friends — who have spoken out against the riots — that people are doing this in his name, using his death as an excuse to steal some crappy trainers from a JJB Sports.

Morons, well, that's certainly one way of putting it; I'm not quite sure what other term could be used for those who were filmed helping an injured and bleeding teenager to his feet, only to start rifling through his backpack to take anything of value. Was he a capitalist, a supporter of the cutbacks who just happened to have lost his way, perhaps having mislaid his merc? Well, that's one possible spin, I suppose.

Then there is the woman who was stabbed in a fight over...over what exactly?, over some principle of the revolution? No it was over a looted cut-price sofa. Incidentally, as the mob smashed its way into this furniture store a member of staff (a capitalist lackey) had his jaw broken while paramedics stood in fear of their lives. Elsewhere, in front of a smashed store window, a woman can be seen trying on a pair of shoes. As one report says, this wasn’t a spontaneous uprising of dissent from the downtrodden masses, it was shopping with violence.

Most people not from this country have probably never heard of Tottenham, Hackney and Brixton, the districts at the heart of the disorders, For the benefit of Americans, the closest parallel that comes to mind is Watts in Los Angeles. Yes, these areas of high social deprivation, much of it inherited, ghettos of state dependency. There have been riots here in the past. What was the result; more oppression, more deprivation? No millions and millions of pounds were poured into community reclamation schemes which have clearly reclaimed nothing.

There is racism here, something else an audience beyond England may not be aware of, but it's not as you may suppose. Black mobs were seen attacking white people but that's really only one dimension. The racism is multi-faceted. Think of the movie Crash, set in California, then you may begin to understand something of the complexity. The hostility is one of ethnic fragmentation, rather than skin colour, black Nigerians hating black Jamaicans, both hating people from the Middle East. Anybody who has managed to rise above the common herd, anybody who has made a success, no matter how modest, has turned into a potential target. One Tweet in this Twitter riot reads "F**k the electronics, them Turkish jewellers needed to get robbed." Yes, the needed to get robbed, as lots of others needed to get robbed.

There are no politics other than the political irresponsibility of the left, singing a hymn that bears no relationship to reality. This includes various Labour MPs, whose administration had over thirteen years to be tough on crime and the causes of crime and did absolutely nothing, other than to pour in endless doles. There are notable exceptions, including Diane Abbott, a black Labour MP, a former leadership contender and a leading left-winger, a person with whom I have virtually nothing in common, politically or ideologically. But she has taken the bold step, distancing herself from those who have irresponsibly blamed the illusory cuts, adding to the Twitter conflagration - "Cuts don’t turn you into a thief. What we saw was people thieving for hours...the violence in London was totally opportunistic and utterly unacceptable."

I would only add brutal and ugly. The victims will all turn out to be other members of the community, not bankers and speculators. The victim is also London, a city I both hate and love in equal measure, a city that is in my blood. I try to be measured but I have no respect at all for those who have abused the city, who have traduced and cheapened it in the eyes of the world and, above all, those who are attempting to twist the facts for their own ideological ends. If you think these dreadful events are about injustice, inequality and deprivation I would urge you to think again. It's no more than hooliganism, based on forms of avarice that would shame even the greediest banker.
Posted by Anastasia F-B at 16:49