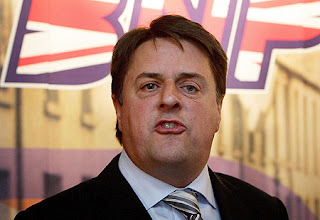 Every summer the British monarch hosts parties in the gardens of Buckingham Palace, a tradition that goes back to the days of Queen Victoria. Originally intended as a reception for debutants they are now used as a form of recognition for various people in public life. Politicians are often included though it is not a political event. But this year an attempt was made to turn it into a political event, the first time ever, so far as I am aware. By whom, you ask? By a frightful and vulgar little oik called Nick Griffin.

English people will be all too aware exactly who this man is and what he represents. For those who do not he is the leader of the British National Party and a member of the European Parliament. This party, little more than a collection of thugs and desperados, is supposedly of the extreme ‘right’, though I will have something more to say on this particular point a little further on. Griffin himself certainly has some dubious Nazi-style political credentials, as well as a conviction for distributing material likely to incite racial hatred.

None of this matters. He was invited to Buckingham Palace, as was Andrew Brons, his fellow party member and MEP, because he has a position in public life and the monarchy takes a strictly neutral stand in politics, even condescending to low class and unpleasant people like this.

But Griffin, always the mouth, always looking for publicity value, started to make play of his honour: he started to use it in a wholly shameful fashion, true to his vulgar nature. He sent out an email to supporters asking them for suggestions on what he should ‘tell’ the Queen if he got an opportunity to speak to her – not that it was very likely - as well as making heavy use of his invitation in the media. As a result, and quite properly, he was banned from attending, to the relief of almost everyone else, I feel sure. The fact that no political discrimination was involved was evidenced by the fact that there was no similar interdict on Brons.

I’ve been following Griffin ever since he appeared last year on Question Time, a BBC television question and answer show, on which he gave an acutely embarrassing performance. It should be possible to watch extracts on YouTube to get a flavour both of his intellect and style. When I say ‘follow’ I mean I signed up on the BNP site for news alerts. I know, I know, but sometimes one simply has to get one’s hands dirty! The reason I know about the Buck House business, having been out of the loop of British politics for some weeks, is because there was an email from him in my inbox, addressed to ‘Dear Fellow Patriot’, lamenting this “totalitarian ban.” He went on to say that it was almost impossible to find anyone who agreed with it. Well, I do, Dear Fellow Patriot that I am!

Never mind his loathsome politics; this man has no class, no style at all. Once again he has been shown up as a buffoon. I honestly can’t believe he managed to get a place at Cambridge, where he attended Downing College. All I will say is that he seems to have left very little trace of himself. Personally I find him quite the ugliest looking creature I’ve ever come across, with his weird facial expressions, not helped by a dead glass eye. If there is ever a remake of Frankenstein he might very well serve as the monster, except that would be unfair to monsters past!

Now let me say a word or two about the politics of the British National Party. People who do not reflect too deeply on these matters generally describe it as of the far right, or that it is ‘fascist.’ Insofar as the party embraces an unpleasant form of ‘patriotism’, based, really, on a deep sense of inferiority, yes, I suppose it can be put in the latter category, though I think that unfair to people like Mussolini, Franco and Jose Antonio Primo de Rivera. But the thing is, in terms of strict political taxonomy, it does not belong to the political right at all.

There is virtually nothing to distinguish the programme of the BNP, when it comes to social and economic issues, from the politics of Old Labour; it’s the same heavy, clunking, ruinous policy of statism and welfarism that so failed this country in the past. It’s as authoritarian and interventionist as New Labour and all other shades of the trendy left. Even the BNP’s base of support is drawn from the traditional working class, those who felt abandoned by Tony Blair and the Islington liberals.

I like to think of myself as right wing, though as far removed from Nasty Nick as it is possible to get This is how I once described my politics in a debate on another blog site;

"At the risk of getting bogged down in semantics I will tell you what I understand by the politics of the right, the things that make me right wing. I believe in classic laissez-faire capitalism; I believe in liberty, taken as far as it can within the bounds of the law; I want to minimise the role of the state, I want to reduce it to the point where it exists simply as a guarantor of liberty, no more than that. I think welfarism is corrosive, corrosive of liberty and corrosive of self-respect. I want taxation reduced to an absolute minimum, allowing people to be free to spend their earnings as they wish. I distrust and despise collectivist and statist ideologies of all kinds. My libertarianism even pushes to the frontiers of anarchism; so does that make me ‘left-wing’?”

Since I wrote this I’ve come across a splendid passage in Cursed Days, Ivan Bunin’s account of his experiences in the Russian Civil War. Bunin, a former Nobel laureate and one of my favourite writers, says;

I am not of the left or the right. I have been, am, and will be an implacable enemy of everything that is stupid and divorced from life, of all that is evil, false, dishonest and harmful, whatever its source.

He was writing as his country was in the possession of one of the most evil, false and dishonest ideologies ever devised. False and dishonest ideologies are always with us, just as people like Griffin are always with us, purveyors of some second-hand, second-class idea. I certainly would not want to come across this over-dressed idiot in the company, no matter how remote, of our own dear Queen.