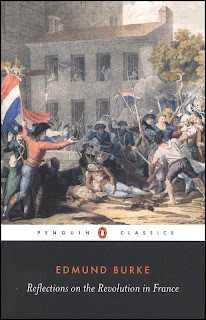 My copy of Edmund Burke’s Reflections on the Revolution in France comes with a splendid introductory essay by Conor Cruise O’Brien, onetime academic, politician, journalist and writer. I understand that he also wrote a biography of Burke which his Wikipedia page describes as ‘unorthodox’, though I think he may have used that term himself to describe his interpretation. I’ve not read it so I can’t say if it is or not. What I can say, and say with assurance, is that his essay brings out aspects of Burke’s life and work that I might otherwise have missed, particularly in relation to Catholicism and Ireland, and the bearing this had on his perception of the upheavals in France.

Burke belonged politically to the English Whigs and - at least by outward association - to the Protestant Ascendency in Ireland; he could never have advanced his political career as far as he did if he had not. But O’Brien identifies a tension between what he calls the ‘outer Whig’ and the ‘inner Jacobite’, between a Protestant gloss and a Catholic tradition. It was this friction that helped drive the irony in Burke’s critique. Here his first target was not the Parisian revolutionaries but the London rationalists, those who identified the Revolution as the triumph of Reason over Superstition and Tradition.

O’Brien’s point here is quite subtle, as subtle as Burke’s intellect. Protestant he may have been but the Irish Catholic tradition was there, part of his makeup and part of his background;

…if Burke as a Whig cherished, at least in theory, the Glorious Revolution, Burke as an Irishman, with close emotional bonds to the conquered, detested the Protestant ascendancy which that Revolution had riveted on the people of his country.

The crucial point of departure here is that events in France were welcomed by the likes of Dr Richard Price, a leading Protestant dissenter. In November 1789 he delivered a sermon entitled Discourse on the love of our country in which he compared the political transformations in France with the Glorious Revolution of 1688, a common theme in the early days.

But if the Glorious Revolution, the Whig touchstone, meant one thing in England it meant quite another in Ireland: it meant hostility to Catholicism; it meant the oppressive Penal Laws. It was the identification of the first event with the second, the English with the French, O’Brien maintains, that wakened the “slumbering Jacobite” in the elderly Whig. The creative tension here goes that one step further; for while in relation to England and France the Jacobite perspective was clearly counter-revolutionary, the opposite was true in the context of Ireland.

The Reflections begins, then, as a rebuttal to Price, begins as a way of getting the English establishment to see that their interests were bound up with Catholicism in Europe; that there Catholicism was the bastion of order, of property and of tradition. It’s a wonderful exercise in intellectual gymnastics, for Burke is getting people to see that it is the militant anti-Catholic Protestantism of the dissenters that is the natural ally of Jacobinism.

So, while preparing the most effective counter-revolutionary polemic ever penned Burke was also planting the seeds of sympathy for Catholicism in the minds of the English, the very antithesis of the message on the Glorious Revolution. Growing hostility towards the Jacobins was, with wonderful irony, accompanied with increasing sympathy towards the Jacobites. That is to say, it was in part thanks to Burke that English policy towards Ireland began to change, evidenced by the Catholic Relief Act of 1793 followed two years later by the foundation of Maynooth Seminary with state support.

In a letter written five years after the publication of the Reflections Burke made plain that his whole politics centred on anti-Jacobinism. He was particularly incensed by the hostility towards religion on which that movement was based. For him the practice of Catholicism “forms as things stand, the most effective barrier, against Jacobinism”. He further argues that in Ireland in particular “the Roman Catholic religion should be upheld in high respect and veneration.”

It’s an impressive argument, one which deepens, if such a thing is possible, the profound respect I already have for Burke as a thinker. My politics, my conservatism, begin with Burke and end with Burke, begin and end with words he wrote in a letter of March 1790, the most devastating critique of bloodlessly bloody ideology ever written. The emphasis here is in the original;

“I have no great opinion of that sublime abstract, metaphysic revisionary, contingent humanity, which in cold blood can subject the present time and those whom we daily see and converse with to immediate calamities in favour of the future and uncertain benefit of persons who only exist in idea.”

Here is the key to the horror of much of modern history, from Robespierre to Pol Pot and beyond.
Posted by Anastasia F-B at 16:06