I want my soul back 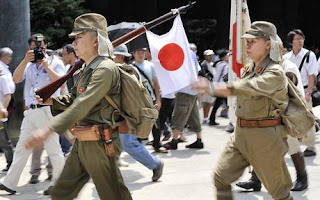 In Potsdam, the capital of Brandenburg and the heart of old Prussia, there is a shrine, sacred to the memory of all those who fell for the fatherland. It’s the final refuge for their spirits, their souls. It’s also a celebration of militarism, a celebration of German martial achievements, without qualification. Among the millions of names you will even find those of Hitler, Goring and all those hanged at Nuremberg. Outside, in the main grounds, the guard marches up and down, dressed in Second World War uniform, including the old-fashioned coal scuttle helmet. Yes, they are there, goose-stepping up and down, a comfort to Germany’s nationalist right.

This is outrageous, don’t you agree, how could such a thing be allowed in the heart of the new Europe? It’s simply not possible. Forgive me; I’ve been misleading you; there is no such shrine, which would indeed be an outrage to the memory of all those who suffered and died last century at the hands of the Nazis. But the thing is there truly is such a place or something very like, though it’s not in Germany – it’s in Japan.

On August 6 every year the Japanese gather at Hiroshima to bewail their fate as ‘victims’. On every other day they can go to the Yasukuni Shrine, situated in the Chiyoda district of the capital, to celebrate the spirit of men who carried aggressive warfare across Asia, including former Prime Minister Tojo and all those hanged after the Tokyo War Crimes Tribunal. And the guard does march up and down under the flag of the Rising Sun.

Though never particularly generous in life to those who served with them – by force – the Japanese are generous in death; for the souls who have been ‘annexed’ include those of 21,000 Taiwanese and 28,000 Koreans, once colonial subjects of the Japanese Empire. They are there in this militarist Shinto paradise whether they like it or not.

Kim Hee Jong does not like it. Kim Hee Jong hates it so much that he has begun a court action in Tokyo to reclaim his soul. What? But how can the dead possibly do such a thing? The thing is he’s not dead, though he was mistakenly reported missing in action during the war. In 2006 he found out to his shame that his name was enrolled at Yasukuni;

I was so angry that I wanted to set fire to the shrine. The war deprived me of a chance to receive an education. That shrine means nothing to me.

As The Times reported on Saturday, Mr Kim is now involved in one of most unusual legal battles in history, a battle over the ownership of his own soul, not claimed by the Devil, though it may as well have been. He is one of eleven plaintiffs, though unique in that the others are the children of the dead. The Yasukuni authorities are resisting the action, claiming that once a soul has been enshrined it cannot be extracted, anymore than a drop of water can be removed from a pool.

This includes Mr Kim, who clearly enjoys the singular distinction of a man whose soul has effectively been stolen and placed in a kind of hell. The court case opens in November.
Posted by Anastasia F-B at 11:56