The Brilliance of Bunin 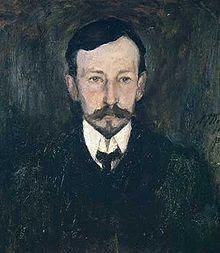 I recently mentioned the Russian writer Ivan Bunin in another blog. I’d like to say a little bit more about him, about a literary genius who deserves to be far better known and appreciated in the English-speaking world.

I ‘discovered’ Bunin in my late teens in a collection entitled The Gentleman from San Francisco and Other Stories - published some years ago by Penguin Books - tucked away in father’s library among books he had accumulated in his student days. I was immediately captivated by the sharpness of the author’s prose, the economy of his style and the poetic beauty of his imagery.

Here was a writer, it seemed to me, who bore comparison with Chekhov, another great master of the short story. But Bunin was different, more intimate, more Proustian, more poignantly introspective. Above all he seemed to have a more acute sense of the beauty and the fleeting tragedy of life.

Like Tolstoy, Bunin came from a long line of Russian aristocrats and serf-owners. He achieved popular and critical success in his native land with his poetry and early short stories, confirmed by the publication in 1910 of The Village, his first full-length novel. But this world, the prospects opened by his creative genius, came to an end when the Bolsheviks took control of Russia in 1917. Bunin records his experience of the ensuing Civil War, as I mentioned previously, in diaries published as Cursed Days, of which I intend to say a little more.

With the final victory of the communists Bunin left Russia, spending the rest of his life as an émigré, latterly in France, where he lived through the Nazi occupation. He continued to write, producing some of his greatest works, achieving sufficient recognition to be awarded the Nobel Prize for Literature in 1933, the first Russian ever to have received this honour.

But as he published in his native language, and as his work was banned in the Soviet Union, where he was condemned as a ‘traitor’ (to be condemned by the communists; how proud he must have been), he was only ever able to reach a relatively small audience, declining with the years. He died in the south of France in 1953, sinking steadily into quiet obscurity.

Coming to Bunin for the first time you are likely to notice that there is none of the grand moralising and philosophising that is such a feature of Russian literature, such a feature of Tolstoy and Dostoevsky. Bunin’s vision, rather, is much more personal and intimate. There is also a sense of the impermanence of all things, of worlds that can close down in an instant, taken away in a moment. The paradox is that this makes passing joys all the greater, all the more intense; joys like human love, at once here and then gone forever, butterflies on a summer’s day. It’s all so futile; it’s all so beautiful.

Sexual love is another of his themes, something he explores in intimate detail in the collection of stories called Dark Avenues. Most of the tales end unhappily, everything in life ends unhappily, but they are not in the least dispiriting. The beauty of the moment is all that counts, all one can ever hope for. Despair may be the price of rapture but it is a price well worth paying; believe me, it is.

Present joys and future regrets is one thread that flows through Bunin’s work, the other is nostalgia, a sense of loss, loss of the past, loss of home and loss of place. His Russia, gone forever, is recreated in memory in the most beautiful, elegiac terms. Even his language, his mode of expression, is of the past, free of the corruptions inflicted on Russian prose by the communists. He escaped and how thankful I am for that. There was no way a man of his background, his sensitivity and his outlook could have survived the contagion that was consuming his land. His frustration and fears are fully expressed in Cursed Days, two extracts from which I have taken at random;

Odessa, May 3, 1919. How fiercely everyone yearns for the Bolsheviks to perish! There’s not the most terrible biblical punishment that we would not wish on them. If the devil himself burst into the city and literally go about with Bolshevik blood up to his neck, half of Odessa would weep with joy.

Odessa, May 5, 1919. Generally speaking as soon as a city becomes “red” the crowd that fills the streets changes suddenly and rapidly…There is nothing simple or ordinary about these faces. They are almost all so extremely and sharply repulsive, so frightening in their evil dullness, that they constitute a threatening, lackeylike challenge to everyone and everything.