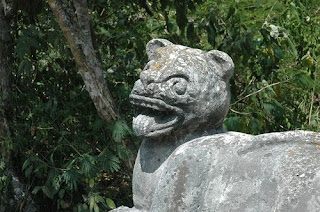 The jaguar, feared and respected, is central to the Mayan pantheon, embracing both the dark and the light. Their principle gods are Jaguar gods, most notably the Black Jaguar of the underworld, or the god of Terrestrial Fire, and the Light Jaguar of the upper. Creation and destruction are twins, not opposites in the Mayan cosmology.

Jaguars were associated with the night sky, especially in the form of a black panther. The spotted jaguar also had night associations, their marks symbolising the stars. Their golden colour also represented the sun and their eyes, glowing with light, were said to be the mirrors of the moon.

Shamans were closely identified with jaguars, evidenced by the fact that in the Mayan language the world balam signifies both magician-priest and jaguar. It was also believed that the shaman, in the midst of a ritual, transformed into a jaguar.

Ixchel is one of the most complex and to me most appealing of the jaguar deities. Principally she is the goddess of midwifery and medicine. She also has associations with the moon and fertility, war and destruction, again this complex unity of opposing forces in the great cycle of existence. 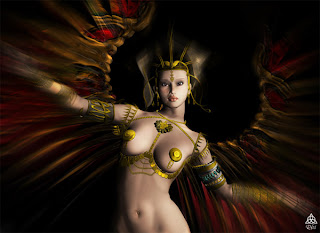