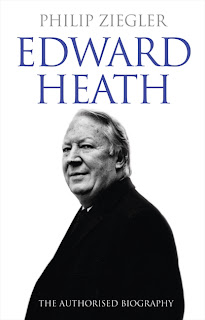 After reading close on six hundred pages of Edward Heath, Philip Ziegler’s recently published biography, I discovered that the former prime minister and I have one single point of mutual sympathy: we have no time for the novels of Jeffery Archer. As for the rest let me just say that last November I finished P. G. Maxwell-Stuart’s Satan: a Biography with greater sympathy for Old Nick than I now do for Grocer Heath!

Ziegler’s book is certainly a commendable effort, scholarly, thoroughly researched, well-written and judicious. He gets close to his subject but never too close, maintaining a proper standard of objectivity. He does his best to be fair to Heath but, my, what a difficult task he set himself, trying to present anything in any way pleasant about this thoroughly unpleasant man, conceivably the worst, least gentlemanly leader the Conservative Party ever had.

As Ziegler mentions, after Heath was appointed as a Knight of the Garter in 1992 Peregrine Wosthorne writing in The Sunday Telegraph referred to Lord Melbourne’s famous comment on the honour, saying “there was certainly no damned merit about Heath…not only was he a rotten Prime Minister but also a most disgraceful man…his un-chivalrous conduct towards Mrs Thatcher is a case book study of boorishness unequalled in the annals of British public life.”

His boorishness was compounded by spite and petulance. When Mrs Thatcher came to see him after her success in the leadership election of 1975 he went around piling books on all of his free chairs so that she would have nowhere to sit – she simply removed them and sat down anyway. There are plenty of other examples of this kind of rudeness in the book, including the time when he simply shrugged his shoulders when President Richard Nixon, initially well disposed to him, suggested they play a piano duet together when he came to visit the White House.

I have to say that my initial reaction was to ignore this book because I simply don’t find the subject all that prepossessing. I was persuaded otherwise by a review in The Spectator by William Waldegrave, a former Conservative minister who knew Heath well, where he wrote;

Yes, well, all I can say he was the essential precursor of Thatcher in the sense that Thatcherism was an essential antidote to Heath; an antidote to the socialism and unparalleled levels of state intervention that he embraced in the latter part of his disastrous ministry. Heath once made reference to the “unacceptable face of capitalism”, his only memorable phrase, which perhaps goes right to the heart of his personal ideology, insofar as this man can be said to have had anything as coherent as an ideology.

I have not the least doubt that Heath was the unacceptable face of Conservatism, a Robert Peel for the twentieth century. He clearly did not like the party. He made no attempt to cultivate its grass roots or even his own back benchers. The dominating question for me, one that Ziegler does not really answer to my satisfaction, is how could this man ever have been elected leader in the first place?

It’s as well to remember that he was indeed the first elected leader in the party’s history. Prior to 1965 they had simply ‘emerged’ by some mysterious nod and wink process, the prerogative of party grandees. The answer seems to be simple enough: there was no alternative. Rather the alternatives were just hopelessly unacceptable; the notoriously lazy Reginald Maudling or the maverick Enoch Powell, no better illustration of the contention that great wits are closely allied to madness.

So Heath it was, a man of relatively humble social origins, the grammar school boy, the man for the times, the answer of a ‘reformed’ Conservative Party to Harold Wilson and the egalitarian spirit of the 1960s. Oh but what a calamity he was. He lost three out of four elections. And how much better it might have been for us all if he had also lost in 1970.

How can one best summarise the Heath ministry of 1970 to 1974? For me it simply has to be debacle, followed by appeasement, followed by abject retreat; surrender to trade union bullies, surrender to socialism, surrender to state control. I can not think of a single redeeming feature. His one ‘triumph’ was to take Britain into Europe, partly on the basis of deceptions over the impact on national sovereignty, as Ziegler makes clear, a fulfilment of a task once entrusted to him when he was Lord Privy Seal under Harold MacMillan, himself a ‘Heathite’, though with the saving graces of a gentleman.

A poor politician, a dreadful leader, a misogynist, a bore, a man with no social graces whatsoever, that was Edward Heath; the man of the long sulk, the man who heathed around for years, waiting for the elusive ‘Churchillian call’; a man who cultivated noisome dictators like Mao and Saddam, while behaving treacherously towards the leadership of his own party. Fuming around, Heath on the blasted heath, the old king driven mad by the perceived ingratitude of others. It’s not an edifying sight; it was not an edifying life.

Rumble thy bellyful! Spit, fire! Spout, rain!
Nor rain, wind, thunder, fire, are my daughters:
I tax not you, you elements, with unkindness;
I never gave you kingdom, called you children,
You owe me no subscription: then, let fall
Your horrible pleasure; here I stand, your slave,
A poor, infirm, weak, and despised old man.
Posted by Anastasia F-B at 15:41