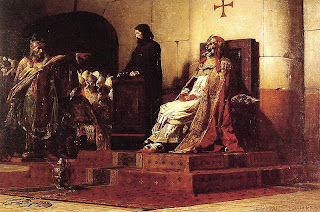 You might think that the dead are beyond all human judgement. Now they are, by and large, at least physically; reputations are still subject to posthumous scurrility. But in the past even one’s physical remains could not always escape some form of earthly reprisal, often in a kind of symbolic act.

I can think of several examples from English history. John Wycliffe, a medieval theologian and reformer, was burned as a heretic forty-five years after his death. The remains of Oliver Cromwell, John Bradshaw and Henry Ireton, who formed part of the court that sentenced Charles I to death in 1649, were exhumed when the monarchy was restored in 1660. They were then hanged, drawn and quartered, the punishment for treason.

I suppose these examples – and there are others – are bizarre enough. They are not nearly as bizarre, though, as putting the dead on trial. Yes, it has happened. And I don’t mean that the deceased was subject to judicial process in absentia, so to speak. No; I mean when the person in question, or what was left of them, was taken from the grave so they could be physically present in court.

It couldn’t happen in English law because the dead can’t plead, retaining not a right to silence, just silence. But it has happened and happened right in the heart of Christendom. So, let me introduce to you Pope Formosus and the Synodus Horrenda – the Cadaver Synod or Trial – an episode I think I can safely say is without parallel in the history of the church.

Formosus was Pope from 891 to 896, during a particularly troublesome period for the Catholic Church. Prior to his elevation he had been Bishop of Porto, during which time he was pursued by ecclesiastical and political controversy, even being excommunicated at one point by Pope John VIII, who accused him, amongst other things, of attempting to seize the papal throne.

Although the interdict was finally lifted and Formosus acquired sufficient authority to be elected Pope in his own right, his already dubious background was made ever murkier by the politics of the day, when rival candidates competed for the honour of the Imperial throne. In the end the Pope seems to have been little more than a victim of circumstances, taking the wrong political side.

The Cadaver Synod, ordered by Pope Stephen VI, his successor but one, opened sometime in the course of 897, months after Formosus’ death. The whole thing seems to have had a clear political purpose though why things proceeded in such a macabre way is difficult to say, when simple condemnation for past misdeeds would have sufficed. Instead the corpse was disinterred, dressed in papal vestments, brought into the papal court where it was seated on a throne, there to face a trail on the basis of the charges once lodged by John VIII, the prosecution being lead by Pope Stephen in person. At one point he even asked the cadaver why he “usurped the universal Roman See in such a spirit of ambition.” Needless to say no answer is recorded.

In the end it was declared that Formosus had been unworthy of the papal honour. After being stripped, literally, of the papal vestments and condemned to damnatio memorie – damnation of memory, a custom once practiced by the ancient Roman Senate – he was finally cast into the Tiber, another ancient custom inflicted on disgraced emperors.

The whole thing was just too absurdly gruesome even for those days, turning public opinion against Stephen, who was deposed and strangled in prison. Formosus himself was fished out of the Tiber and reputed to be the cause of miracles.

But matters did not rest there. The unfortunate Formosus, who travelled as much in death as in life, was reputedly disinterred for a second time in the early tenth century during the pontificate of Sergius III, an ally of Stephen, who had taken part in the first Cadaver Synod. Once again he was tried and found guilty, this time his head being cut off. It’s as well to remember that the history of the papacy was as colourful, as brutal, as fascinating and as decadent as the history of the emperors who preceded them in the eternal city.
Posted by Anastasia F-B at 16:00