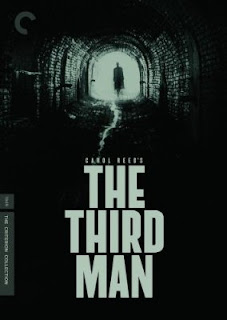 Last year I went to a sixtieth anniversary screening of The Third Man, arguably the best example of British film noir ever made. I’d seen it before on television but that’s a poor substitute for the full movie experience. Directed by Carol Reed on the basis of a screenplay by Graham Greene, it has some really super performances by such people as Orson Wells, Joseph Cotton, Alida Valli and Trevor Howard. Even the minor parts are terribly well done.

I love everything about it. It’s an intelligent movie for intelligent people, a contrast with so many mainstream thrillers now, with poor plotting and limp dialogue, inadequate settings for a succession of boom bang special effects. Everything about The Third Man is so good - the script, the atmosphere, the expressionist mood, the historical setting, the black and white cinematography; even the jaunty zither score!

I don’t need to retell the story; it’s too well known. Sufficient to say that the action takes place in post-War Vienna, a city still under four power occupation, a city where racketeering is a way of life, a dangerous city, a city where the step between life and death is all too brief. Into this mix comes Harry Lime, brilliantly played by Orson Welles, a bad man, a vicious man, but a man impossible to hate. For me Lime will always be the one truly great anti-hero of British cinema.

The camera angles, the cutting and the use of light and shade even now appear slightly revolutionary; they must have been a real sensation in 1949, especially for an English audience not familiar with the masterpieces of German Expressionism. The screen play is also filled with some really memorable lines, my personal favourite being an observation by Lime;

This is an historical travesty, given Switzerland’s role in European affairs at the time of the Borgias, but a delicious travesty from a delicious movie! You can keep the old Vienna before the war with its Strauss music, its glamour and its easy charm; I would far rather have the dark Vienna, the exciting Vienna; the Vienna of Harry Lime!