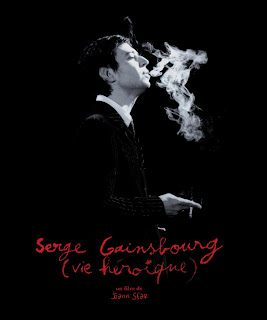 Three years ago I went to see La vie en Rose, a French biopic about the life of the wonderful Edith Piaf. I’ve now seen Gainsbourg, vie héroïque a portrait of Serge Gainsbourg, another French cultural icon. By coincidence – completely unaware that this movie was on the point of release – I wrote a blog a few weeks ago about Je t'aime... moi non plus (The Sexiest Love Song Ever Written), his famously infamous duet with Jane Birkin. Is the movie as sexy? No, but it has some deliciously orgasmic moments!

Gainsbourg was directed by Joann Sfar, probably better known as an artist and creator of comic books than a movie maker. Among his influences is the painting of Marc Chagall, which shows strongly in some of the movie’s more surreal moments. There are some fine performances, particularly from Eric Elmosnino as Gainsbourg, a part he was born to play on the basis of his looks alone, Laetitia Casta as Bridget Bardot and Lucy Gordon as Jane Birkin, the great love of Gainsbourg’s life insofar as any woman can be said to have commanded that demanding part.

Gainsbourg as a composer and song writer is one of these people it’s almost impossible to classify, his work crossing so many boundaries. The movie tries to cover as much of his style as possible, and therein lies the problem, or part of a problem: it’s simply too ambitious, ambitious to the point of being breathless.

The other problem is that the director has eschewed a straightforward chronological format, which rather makes the life a little difficult to follow, proceeding by unexplained leaps. Sfar’s makes full use of his talent for cartoon imagery and caricature, highly effective at points, though rather at the price of proper dramatic and narrative focus.

The story really begins in war-time France where Lucien, as Gainsbourg was then known, grew up as the son of Russian Jewish immigrants, a double outsider, a foreigner and a Jew. Although the mature artist was quintessentially French, his ‘otherness’, and his perceived ugliness, was to haunt him all his life.

As a boy he is pursued –literally –by a grotesque anti-Semitic caricature, one that jumps out of a poster on a Parisian wall. This later transforms into a puppet alter-ego, one that exaggerates his own pronounced Semitic features, one that continually exposes his self doubt as well as inspiring his subversive genius. In the cast honours I really should also mention Kacey Klein who plays the young Gainsbourg, cocky and assured, in some of the movie’s best scenes.

Thereafter the life and the art crams in, so much so that Sfar seems overwhelmed by the material, moving from song to song, episode to episode, love to love in a breathless, somewhat impressionistic matter. Casta’s entrance as Bardot is sublime but Gordon as Birkin rather ‘drops down’, so to speak, without preamble or introduction. Then comes that song, that wonderful sexy masterpiece, sung in the original, as the couple bathe together in a golden light, for me the highlight of the movie.

Controversial as Je t’aime was it seems not to have been nearly as controversial as another song, at least in his native France. After he recorded a reggae version of La Marseilles he was confronted once again by his ‘otherness’, washed over by waves of aggressive anti-Semitism. One notice said that he had brought this on himself by his ‘provocations’, the kind of vicious casuistry that would not have been out of place in Vichy. We see him confronting a group of beret-wearing veterans, angered by this alleged insult to the national anthem, reminding them that it is a song for rebels and that he is a rebel. As he proceeds to sing the berets are quickly removed!

Looking back over what I’ve written I begin to feel that I may appear more negative than necessary. I do stress that I enjoyed this movie; I enjoyed some of Sfar’s treatment of the subject. I could see what he was aiming at. It’s just that this was a large life of a larger than life figure, described after his death by President Mitterrand himself as “our Baudelaire, our Apollinaire”. Sfar has reduced it to a series of cameos, some good, others less so, not just out of artistic preference but as a way, I suspect, of coping with the complexity.

Finally, I should say that I came away feeling really sad, sad that the beautiful and talented Lucy Gordon took her own life last year in Paris. She was a wonderful Birkin, utterly convincing as ‘Little Miss England’. Gainsbourg will serve as a lasting tribute.