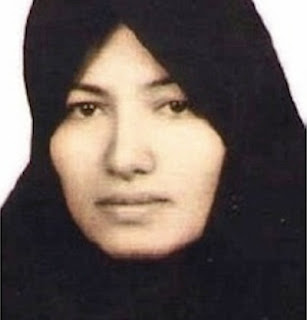 I have no doubt at all that the present Iranian regime is perfectly vile. They trade in concepts of faith and religion that are quite beyond my comprehension. Just imagine if England was overtaken by some fundamentalist Christian cult that wanted to return to the practices of the Middle Ages; people who wanted to restore such legislation as De heretico comburendo, allowing for the burning of heretics. Perhaps someone would like to put this suggestion to the present muddle-headed Archbishop of Canterbury, since he has already expressed his enthusiasm for Sharia Law.

I cannot claim to have any deep knowledge of this barbarous procedure, this nauseating medievalism, but it is under Sharia Law that Sakineh Ashtiani has been condemned to death for her supposed adultery, condemned to death by stoning. The fact that she was already been subject to ninety-nine lashes, and has been in prison for five years awaiting this ultimate fate, defies even expressions like ‘cruel and unusual punishment.’

As I mentioned in a previous blog, stoning is not a quick death; it’s not meant to be. Instead medium sized rocks are chosen to prolong the suffering. Men so sentenced are buried to their waists, and if they are able to get out there is no further punishment. Women, in contrast, are buried almost up to their necks, just in case their breasts show, you understand, which would be outrageous, a clear offence to simple decency. Their chances of escaping are therefore non-existent, as they are effectively tortured to death.

This is carried out in the name of God, in the name of religion. What kind of people are they, I have to ask, who can believe in a God like this, in a law like this? There is no greater danger than the literal, unimaginative interpretation of sacred texts. For centuries women, and it was mostly women, were tortured and burned to death in Europe because of a biblical injunction about not allowing witches to live, which turned out to be a mistaken reading anyway, good news for witches, not so good for poisoners. Nevertheless, I simply cannot imagine even the most unregenerate fundamentalist wishing to return to a barbarous past

But in Iran a barbarous past is a barbarous present. The world-wide outrage over the fate of Ashtiani has – temporarily – stopped execution of her sentence. As a measure of the regime’s embarrassment she appeared on state-controlled television recently ‘confessing’ to both her adultery and to a plot to kill her husband. Her defence lawyer, forced to flee to Turkey in fear of his life, has said that the confession is bogus, that it was effectively tortured out of her, a claim supported by the fact that not even her children have been allowed to visit her in prison since.

When I see that man Ahmadinejad, the international face of the obscurantist tyranny, being embraced by the likes of Castro and Hugo Chavez I know that evil still walks the world, I know that the fate of this poor woman is in the hands of monsters, monsters who claim to act in the name of God. Forgive me if I appear a little less detached, a little angrier than normal, but there are some things that defy dispassion, even for me.
Posted by Anastasia F-B at 12:04