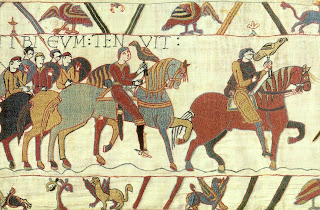 At long last I can come out: I confess it, I’m a Norman! Yes, a Norman, and doubly so, for my surname combines Fitzgerald and Beaumont, both of Norman-French origin. Fitzgerald comes from fils de Gérald, meaning son of Gerald, and Beaumont from beautiful mound. My history is the history of England, though one would never guess as the Normans in popular culture are more often bad than good, the heroes being Anglo-Saxon, people like Hereward the Wake and Robin Hood. They are not my people; they are not my heroes: I’m Norman and proud!

So, what brought this on, you may wonder? Simply this: I watched The Normans, a three part historical documentary screened on BBC2, in which Professor Robert Bartlett outlined the history of the warrior state-builders from their Norse origins to the Crusades. The final episode was screened last Wednesday, in which he described at length the formation of the Norman kingdom in southern Italy and Sicily, a story less well known in this country. I was abroad when the first two episodes were screened but managed to catch up thanks to the benefits of iPlayer.

The centre-piece, the keystone in the building of the story from an English perspective, came in the second episode, which dealt with the Battle of Hastings and the Conquest of 1066, by far the most significant date in our history, once a lot better understood than it is now. The first episode dealt with the origins of the Normans, not in France, of course, but in Scandinavia.

I hesitate to say this but, as one is best not to take things for granted, the Normans were, of course, North Men, Vikings, in other words. They settled in what is now French Normandy in 911, where their leader Rollo the Ganger was granted lands by the French crown, an act of territorial appeasement that was to be a germ of greatness.

Now settled, the Normans steadily went native, speaking a variety of French and acquiring a taste for wine. But they always remained of singular appearance, not just clean shaven but closely cropped, with heads shaved up the back. As Vikings they were infantrymen but as Normans they became knights, acquiring superb skills in horsemanship.

It seems to me that the other important thing to remember about the Normans is that they never quite lost their ancestral habits. Freebooters they were, freebooters they remained. They became Christian, the builders of some of the greatest religious foundations in both France and England, though they never quite lost their pagan ruthlessness. And they were ambitious; my how they were ambitious, with a hunger for wealth, land and power. They were history’s greatest pirates, opportunists and adventurers.

In a sense they were a race of ‘younger sons’ in a feudal society where the eldest inherited everything. Knowing nothing but skill in arms, these younger sons were to spread Norman power outwards. After the conquest of England the less well-favoured began a steady advance into the Welsh borderlands, where, as the Marcher Lords, they were nominally beyond the power of the English crown.

And it is here, in the Welsh marches, that the story of the Fitzgeralds truly begins, an epic carried to Ireland. The details of the Fitzgeralds, touched on in episode two of the documentary as a supplement to the conquest and transformation of England, was recorded by the monkish chronicler, Gerald of Wales. He celebrates the prowess of his family with some pride;

It was opportunism and land hunger that took the Fitzgeralds to Ireland, a significant component of the army sent there by Richard de la Clare, second earl of Pembroke, better known to history as Strongbow. In 1170 one of Strongbow’s commanders, Raymond Fitzgerald, encountered an Irish force at Baginbun near Bannow. Although considerably outnumbered Raymond was victorious, an inspiration for the couplet “At the creek of Baginbun Ireland was lost and won.” It was opening act of an eight-hundred year epic.

Norman achievements in France, England, Wales, Ireland and Scotland, where they were invited to come, were certainly impressive, but perhaps not nearly as impressive as their achievement in Italy, where they came initially as a small band of penniless mercenaries, eventually replacing the Byzantines and the Moors across the whole of the south and Sicily. Their power was such that they eventually became a threat to the security of the whole Byzantine Empire. One of their greatest and most unscrupulous leaders, Robert Guiscard, was described thus by Anna Comnena, the Byzantine historian;

This Robert was Norman by descent, of minor origin, in temper tyrannical, in mind most cunning, brave in action, very clever in attacking the wealth and substance of magnates, most obstinate in achievement, for he did not allow any obstacle to prevent his executing his desire. His stature was so lofty that he surpassed even the tallest, his complexion was ruddy, his hair flaxen, his shoulders were broad, his eyes all but emitted sparks of fire, and in frame he was well-built ... this man's cry it is said to have put thousands to flight. Thus equipped by fortune, physique and character, he was naturally indomitable, and subordinate to no one in the world.

Bartlett’s explorations here were altogether fascinating, showing the speed by which these soldiers and intriguers built up their power, even defeating an army headed by Pope Leo IX in person at the Battle of Civitate. Thereafter, as true Christians, they pleaded for Leo’s forgiveness; thereafter, as true Normans, they kept him prisoner for nine months until he recognised their conquests!

I’ve concentrated on the Normans’ martial and political exploits here but Bartlett also devotes much time to their achievements as builders and as sponsors of the arts. As builders we still have reminders of them today in churches and cathedrals as well as castles, formidably impressive even as ruins. So, yes, I’m proud to be a Norman.:-)