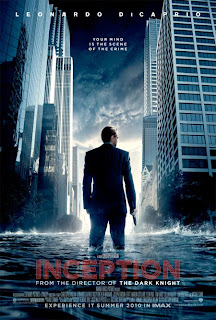 We are such stuff as dreams are made on; and our little life is rounded with a sleep. But, wait; don’t fall asleep too soon, or if you do fall asleep take out plenty of dream insurance; otherwise Cobb and his team might invade your mind and take you in directions you’d rather not go.

What on earth am I on about, you wonder, and who on earth is Cobb? I’m on about Inception, the summer ‘blockbuster’ (horrid word) directed by Christopher Nolan and starring Leonardo di Caprio as Dom Cobb, an engineer of dreams. I like Leonardo as an actor, I have ever since Titanic, but if I say to you that he still seems to be on Shutter Island in this movie then you have a key both to his performance and my appreciation. So read no further; you’ve been warned!

I’m not going to say too much about the actual content of the movie, in fact I’m not going to say anything at all other than it’s a sci-fi thriller full of all sorts of spectacular effects as we are taken through dreams within dreams within dreams, almost as if an onion is being peeled away layer by layer. Nolan, clearly a man with a vivid and creative imagination, was obviously able to command the big bucks because the dream magic is lavish: I particularly liked the streets of Paris turning in on themselves.

Inception has been thrilling the masses in the multiplexes across the globe. That’s not at all surprising really, because it’s a super double-cheeseburger with all the trimmings, quite technically brilliant at points. The reviews have been mostly rave, for once the critics broadly in tune the audiences. If you like technical wizardry, if you like imaginative playfulness, if you like a thrill every half-minute Inception is your movie. If you like grown-up films, adult films with a serious and believable plot, with serious and believable characters, active rather than hyperactive, then it is not. It’s most assuredly not my movie.

Yes, I was impressed by parts - once I managed to get my head round what was going on - but in the end, as we are taken to the heart of the mystery, the heart of the dream labyrinth, as that safe is opened and that message given what immediately came to mind was two simple questions: “Is that it?”, “Is that what all this hyperactive fuss has been about?” Sorry, I’m being more than usually cryptic; if you’ve seen it you will know what I’m on about: I’m on about paper windmills!

I’m really thinking of giving up altogether on Anglo-Saxon film makers, giving up on movies that are full of sound and fury signifying nothing, with the honourable exception of those made by the superlative Clint Eastwood. The trouble is I saw Gainsbourg before Inception, a French movie full of drama signifying something, signifying that it had an intelligent and interesting story-line, signifying that this was an adult movie for adults, not perpetual teenagers. Not waving but dreaming, that’s Inception, overwrought, overdone and far too pompously self-important.