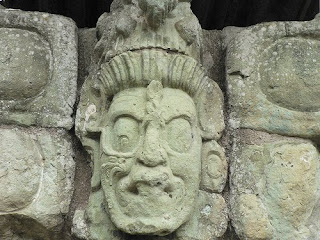 The wanderer returns with tales to tell; of rough quarries, rocks and hills whose heads touch heaven, it was my hint to speak, — such was the process; and of the Cannibals that each other eat, the Anthropophagi and men whose heads do grow beneath their shoulders. Well, not exactly, but there is so much more almost as wonderful!

To begin with I have to say that we were far too ambitious, our programme was too ambitious. I did not make it to southern Mexico, as I had intended, though I did manage the other places in my peregrination through Central America, from Guatemala to Panama. I spent several days in Honduras though not as much as I would have liked because of a major outbreak of dengue fever, a mosquito-borne disease, which caused the government to declare a state of emergency in June. We kept an eye on the latest news, in the end deciding that life was all risk, and since we were here we might as well be there!

Anyway, we arrived in Guatemala, so it is with Guatemala that I shall begin. One of the chief reasons for coming here was to go back to Tikal, to explore the superb Mayan ruins at greater length. We flew from Guatemala City on a three-day trip, an odd experience in itself because we had to wait for a heavy morning mist to clear before take off, the last thing I expected. Oh, but it was worth it, those temples are tremendous, far more impressive than the Egyptian pyramids. The jungle setting is also something special, with monkeys and macaws calling from among the trees. 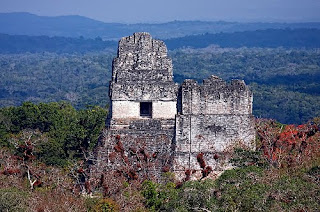 It’s possible to spend weeks here without covering the full complexity of the Maya, their architecture and their culture. We had a guide for the first day but for the rest of the time we explored some of the lesser known sites on our own with the aid of a map, something recommended in the Rough Guide handbook, my indispensible travel bible! Among other parts of the site we visited the Mundo Perdido – the Lost World (yes, I know; shades of Conan Doyle!) – home of the thirty-two meter high Great Pyramid, which stands on the site of earlier structures, the oldest dating back to 500BC. 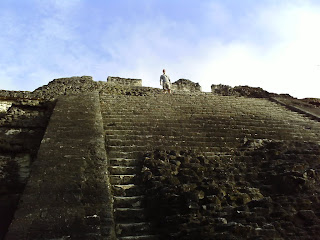 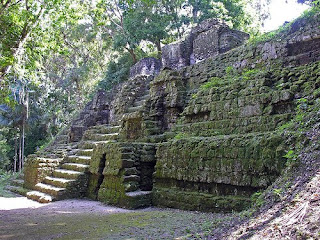 There was another Mayan site I had to visit, that at Augateca, not simply because are reported to be among the best, but because getting there involves an additional adventure as the place is accessible only by canoe, situated, as it is, on the Petexbatun Lagoon. The whole thing was terribly worthwhile, and while the remains are not as impressive as those at Tikal there are fewer tourists and more archaeologists. The setting itself is also quite spectacular, a visit accompanied by an unforgettable chorus of howler monkeys! 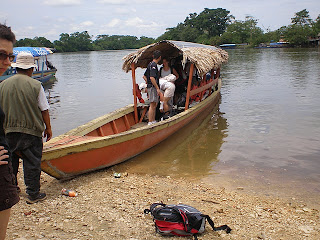 From ancient days we travelled through space and time, going on to the city of Antigua, formerly one of the treasures of Spanish America. It’s a charming place, a lot less nerve-racking than Guatemala City, with some lovely colonial-style architecture, though parts of it much abused by repeated earthquakes. We had a couple of days here, not just soaking up the atmosphere but experiencing the insane night-life, drinking tequila shorts with some lovely American boys who adopted me as a kind of mascot!

Still keeping an eye on Honduras, we went to Costa Rica next, here looking for drama in nature rather than drama in history. Basing ourselves in San Jose, the capital, a place I do not recommend, we went volcano hopping. I’ve been to the top of fire mountains before but I’ve never actually seen into the craters because they have usually been heavily draped in mist. I’m told that from the top of Mount Irazu it’s possible to see all the way to the Caribbean coast. I will just have to take the guidebook’s word for it because my vision was limited to a few meters in all directions!

After some vigorous appeals to Vulcan I’m delighted to say that the mists on the top of Mount Poas cleared just enough for me to get a good view into the crater. The thing is, as volcano baggers will know, even when one cannot see them one can certainly taste them, that sulphurous flavour that hits the back of one’s palate. 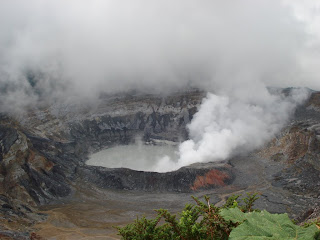 Jungle exploration was another Costa Rican experience, though this time flying through the treetops of the Monteverde Cloud Forest, a quite fantastic experience, rushing from zip line to zip line. I also did a spot of canoeing. I did not see as many monkeys as I did in Guatemala just sloths, sloths and more sloths, creatures which really do deserve their name! Actually I did see quite a lot more - crocodiles, turtles and some wonderfully exotic birds, including my very first toucan.

So, here we are, over a week and a half into the safari and I’ve still not been to Honduras. That’s it; no more hesitating; it’s time to go and the Devil goes with me...along with my boyfriend (is there a difference?)

I’m so glad we went. The dengue emergency was passing and Tegucigalpa, the capital, was perfectly calm, with no sign at all of any kind of political trouble. I stayed here for two days exploring, bar-hopping and generally getting to know people. I’m pleased to say that I did not come across anyone who had a good word to say about Manuel Zelaya, the ousted president and dictator in the making. Perhaps I just spoke to the wrong people…or went to the wrong bars!

I have to say that Tegucigalpa, though certainly a tad more interesting than San Jose, is not really the kind of place where one needs to spend an awful lot of time. There is some interesting colonial architecture in the centre but that’s not what I was here for; no, it was on to Copan and the Mayans.

Copan itself is a lovely place, far more relaxed than the capital. The ruins lie approximately two kilometres to the east of the town. Before entering the site properly we spent some time looking at the superb collection in the Museum of Mayan Sculpture. Although the Copan Ruins are not nearly as spectacular as Tikal there are some really super sculptures, reliefs and alters. Some of the temples are also truly special, particularly the cluster in the area known as the Acropolis. I know this has probably been said many times before but the Hieroglyphic Stair way left me speechless with excitement. 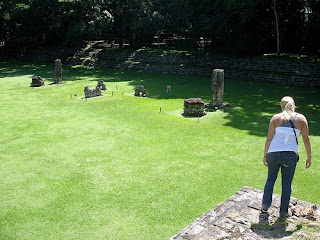 After a fairly intense few days it was back to Tegucigalpa and from there on to Panama. I’ve now seen several Central American capitals but there is nothing to compare to Panama City. Looking at those soaring skyscrapers, known locally as the ‘Cocaine Towers’, as one approaches the city across the causeway makes ever other place seem so provincial.

Again we did a lot of exploration here, particularly in the ruins of Panama Viejo – Old Panama – abandoned in the seventeenth century after it was ransacked by a certain unscrupulous English buccaneer by the name of Henry Morgan! But Panama was chiefly for relaxing, playing, beaching and having lots of fun. My most memorable experience will probably be the super luncheon with new friends in the Restaurant Mira Flores, overlooking the Panama Canal.

Yes, we did spend lots of time exploring throughout the trip but this was punctuated by all sorts of other activities, swimming, talking, making friends, being generally laid back and super cool. I also managed to get in a spot of riding in both Honduras and Guatemala, including one splendid gallop along a largely deserted volcanic beach. The whole trip was such a tremendous experience. I could have spent twice as long but here we are, England, home and beauty.

The world is a book, and those who do not travel, read only a page. 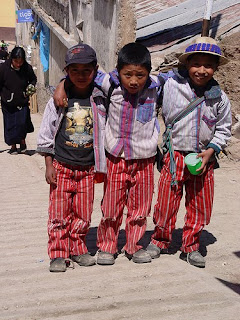 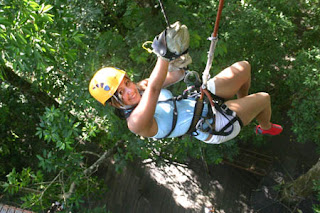 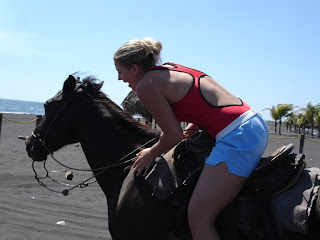 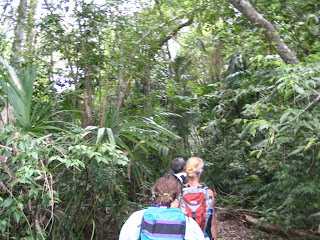 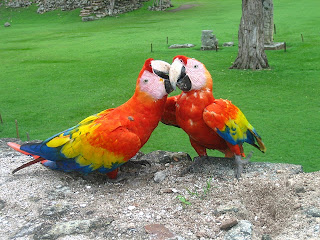 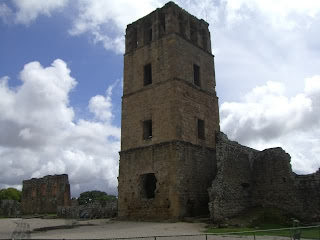 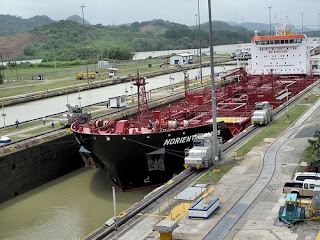 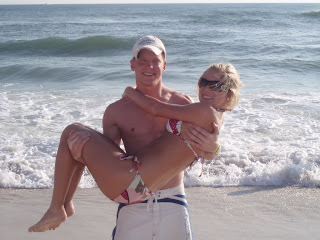 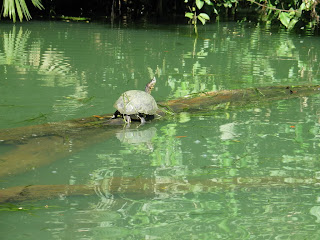