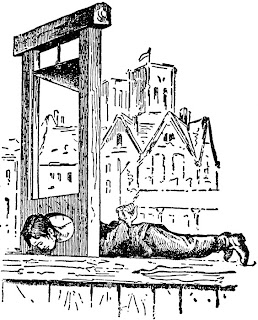 I’m a polemicist by nature and inclination; I simply can’t help myself. Questioning and debating are habits I learned early. I’ve been refining them all of my life. I love taking people by surprise, appearing as if by ambush. Give me a nice meaty subject I can get my teeth into and, boy, that’s when I really bite!

The French Revolution was a ‘good thing’, a view that was put to me not so long ago. Yes, the Terror was bad but think of all the virtues, the Rights of Man and the Citizen and so on, a positive step forward for France; a positive step forward in history. What rot, what complete rot. It was a view that was originally expressed by that pain Paine, who professed himself competent in The Rights of Man to speak on behalf of the English nation.

I can only ever speak for myself but when I look at events like the French Revolution, when I see references to abstractions like the ‘rights of man,’ I see ideological purity translated into political action; and when purity acquires arms it kills and kills with abandon, removing all of the perceived impurities of life. From Rousseau and the Social Contract to Robespierre and Madame Guillotine, it’s a path followed through Virtue.

And for France, what did the Revolution bring? Liberty, Equality and Brotherhood were the watchwords, proved in practice to be no more than lying hypocrisy. What it brought was fanaticism, dictatorship and war and more war. How prescient Edmund Burke was in his Reflections on the Revolution in France. If anything his single fault was in underestimating the scale of the disaster to come. If the French could only have looked far into their own future, one of sudden and frantic energy followed by long and slow decline, they would have hurried back to the Ancien Régime, the old gentle monarchy of Louis XVI.

The Fifth Republic, the latest metamorphosis, is still with us. Fifty-four years old this year it may exceed the seventy years of the Third Republic. I say may because when it comes to French politics and history it makes sense to err on the side of caution. With the euro crisis set to deepen, with the country facing uncertain economic and political times, with a crisis affecting the very identity of the French nation, a nation being consumed by the European Monster, a nation being eroded by culturally alien elements from within, who can say what the future will bring. Wise countries avoid revolutions. They do not usher in the springtime of the people but the winter of their discontent.
Posted by Anastasia F-B at 15:28