Obama against the Deer Hunters 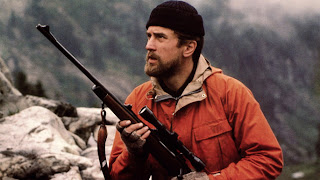 This is a piece I wrote a year and a half ago. It has a topical relevance though some of the reference points are now slightly dated.

The United States is a nation built by rebels, built by those hostile to the state, those who sought freedom across the ocean and deep into the frontier. Looking over the country’s history one can see this principle, this hostility to state power asserted time and again, from the Bill of Rights onwards. Last century the House of Un-American Activities was set up specifically to examine those who embraced ideologies that challenged the basic principles on which the nation had been built. Senator Joseph McCarthy also set off in pursuit of those same elements.

I’m not sure if Americans knew what they were getting when they voted for Barack Obama in November 2008. But what they are getting is arguably the biggest structural transformation in their country’s history, bigger than FDR’s New Deal, which was nothing more than smoke and mirrors in contrast. Obama’s socialism, expressed in the centralised health care system and a redistributive tax programme, comes, as all socialism comes, with an increase in the power of bureaucracy, an increase in state power and authority.

The irony here is that the Democrats are losing the support of the deer hunter vote. Who on earth are the deer hunters, you might wonder, and what have they got to do with American politics? My reference here is to The Deer Hunter, the 1978 movie about men from a blue collar community who went to Vietnam, inspired by now unfashionable ideas of patriotism and love of nation.

Blue collar and working class these people are; socialists they are not. They are people who gain no benefit from the Big State and Obamaism, people who resent their tax dollars being used for welfare programmes and administration; people who resent America being turned into just another ‘social democracy’, just another version of the European Union. Obama told Joe the Plumber, the archetypal deer hunter, that he intended to “spread the wealth around.” What he did not tell him was that it was his ‘wealth’ that would be spreading.

Janet Daley writing in The Sunday Telegraph said that it was unacceptable in bien-pensant circles to express concern over mass immigration or Obama’s heath care programme. They are educated people, sophisticated people, people with a bourgeois sense of morality. Those who do express concern over big government and mass migration are, of course, small-minded bigots, rednecks; just not the right sort.

The thing is ‘the right sort’, these refugees from The West Wing, did not build America. That was the achievement of small people, those who believed in self-reliance, those who had ambition and the drive to clear the wilderness, those who believed that they should benefit from the fruits of their own labour. It was the deer hunters who built America; it’s the liberals and the socialists who are destroying it.
Posted by Anastasia F-B at 15:46