Maid of Grantham, Made of Iron 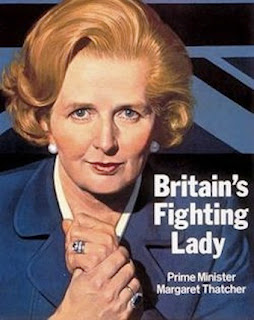 One simply can’t avoid Margaret Thatcher at the moment. There she is, staring out from the side of city buses, like the ghost of Conservatism past, a constant reproach to David Cameron, the Tiny Tim of the Party, the God help us everyone Prime Minister. Actually it’s not her at all; it’s Meryl Streep looking remarkably like her in advertisements for The Iron Lady, which I saw last month.

I’ve been thinking a lot about the real Iron Lady recently, both in the light of that biopic and in the light of contemporary political developments. I’ve just read a marvellous piece in the January issue (yes, my reading always lags behind; there is so much!) of Prospect, a monthly political periodical. Entitled The DNA of a Generation it’s by John Campbell, the author of a two-volume biography of Baroness Thatcher. I have it in my collection somewhere, an orphan reproaching me for my heartless neglect. Well, in the light of Campbell’s article, it’s jumped into my consciousness, several rungs further up on my ‘to-read’ list.

I never knew Thatcher in the days of her ascendency. I was born the year before her third election victory in 1987, so she is not in my DNA in the way that Campbell maintains she is in the DNA, love her loath her, of everyone over the age of thirty-five. She’s in my political DNA, though; I know of her legacy, her history, her commanding presence in both British and world politics.

The Iron Lady, though not a great movie, makes it clear that there was nothing phony about Thatcher, nothing of the Blair or the Cameron, small men without vision or direction. In so many ways she seems to be the last of the conviction politicians, a woman with an idea and the determination to give that idea shape in reality.

Campbell makes a point that I hadn’t really considered before, that Thatcher was not, as I had assumed, a uniquely British phenomenon. No, she was part of a global revolution against collectivism which swept across the world, bringing in its wake the collapse of communism in Eastern Europe. In this country she was the expression of a massive reaction against those things which had brought us so low – labourism, Keynesianism and corporatism, all conveniently grouped under the rubric of socialism. She was also a reaction against that awful phenomenon known as one-nation Toryism, a kind of political appeasement.

In Britain the Thatcher revolution released a huge wave of enterprise and energy that seemed to swamp decades of decline. The emphasis here should be on seemed because subsequent governments, particularly that of Tony Blair, showed that it was all an illusion. Still, it was magnificent when it lasted; she was magnificent when she lasted, before she was betrayed by the one-nation euro fanatics in her own party, those wretched men like Howe and Heseltine, traitors with a lean and hungry look.

Napoleon once observed that generals need luck. Thatcher was lucky in her friends. She was lucky to have Ronald Reagan as President of the United States. It was her relationship with him, and with Mikhail Gorbachev of Russia, that gave the impression that the old wartime partnership of Churchill, Roosevelt and Stalin had been resurrected, that Britain mattered on the world stage after so many years of irrelevance.

She was just as lucky in her enemies. What a gift to any aspiring leader to have General Galtieri of Argentina as an opponent from without and Arthur Scargill, the leader of the National Union of Mineworkers, as an opponent from within. It’s almost as if a comic farce was being performed, with these two morons walking on as pantomime villains, Mr Stuff Shirt Fascist and Comrade Comb Over! Quick, a left hook to the Argies in the Falklands, a right hook to the miners on a summer strike! The result was a massive vote of national confidence in a Prime Minister with seemingly impeccable judgement.

Although her approach in economic matters was guided by those who adhered to the monetarist doctrines of Milton Freedman I don’t think that Thatcher was an ideological dogmatist. With her it was all instinct. Her thinking here was all down to her upbringing. It was all a question, you see, of good housekeeping. Frugality, hard work and discipline were qualities that she learned from her father, Alfred Roberts, a grocer and local politician in the town of Grantham in Lincolnshire. The paradox, as Campbell points out, is that her liberalisation of the British economy released a kind of ‘casino capitalism’ of which she never approved, an economic culture which began with the thrifty world of Alfred and ended with that of Mark, her unattractive playboy son, Mr Lodsamoney in person.

Hers was a rapid trajectory, a sudden ascent and a dramatic decline, almost Shakespearean in intensity. In the end it was more of a tragedy than a triumph, all the more tragic because the real enemy within was within her own government. What came after was the pathetic and incompetent John Major, who presided over a lengthy political civil war. What came after was Tony Blair, a slimy opportunist with no bigger idea than to get himself elected. What came after was Gordon Brown, a charmless Presbyterian ogre. What came after was David Cameron, the focus group Prime Minister, shallow and insincere. They all have one virtue – they make Margaret Thatcher look all the greater, all the more honest, all the more competent. It’s unlikely that her achievement will ever be matched.
Posted by Anastasia F-B at 15:44