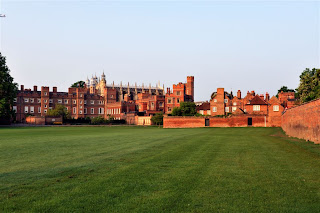 My grandfather and father both went to Eton College, the public school founded in 1440 by special endowment of King Henry VI. I would have gone too if had been a boy, continuing in a family tradition. For those who are not English I should make it clear that public does not mean public but private, as in private and highly exclusive! It has a reputation that carries far and wide, generating more than a few myths in the process.

The Duke of Wellington, another alumnus, said that the Battle of Waterloo was won on the playing fields of Eton. Perhaps you’ve heard that one? A good many people have. Actually he said nothing of the sort. The comment, though not in that exact form, first appears in the French memoirs of Charles Count de Montalembert, published in 1856, four years after Wellington’s death.

There was one great conflict won on the playing fields of Eton, or rather by the discipline and training induced by the school’s officer corps, a far grander field of combat than Waterloo – the First World War no less. Yes, indeed; or it least it was according to Adolf Hitler.

Anthony Eden, then Foreign Secretary and himself an old Etonian, visited Hitler at Berchtesgaden in the months leading up to the partition of Czechoslovakia at Munich. Clearly war was on Hitler’s mind, particularly Germany’s defeat in the First World War. British victory was no surprise, he rambled on, given the school’s military ethos. Eton clearly acquired a paramount importance in his mind as the cradle of the British establishment, the cradle of all its glory!

Of course when Hitler was convinced of something it was impossible to change his mind. Eden’s objection that the College officer corps was shambolic was simply shrugged off. I dare say he concluded it was an act of dissimulation on the Foreign Secretary’s part. Apparently, though I can’t find any hard evidence of this, he even ordered the school bombed during the Second World War. Two bombs did fall on the College in 1940, one just missing the Library, hardly proof, though, of a systemic campaign. Still, it may prove one thing: that Luftwaffe pilots were not the types ever to grace the playing fields of Eton.