The Business of America is Bureaucracy 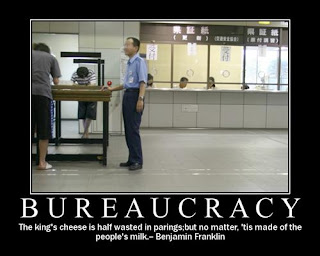 One of the respondents to Obama against the Deer Hunters, presumably taking exception to my claim that he is a socialist, simply posted a link to the Texan-based PolitiFact site, where a similar claim by Governor Rick Perry is dismissed as hyperbole. The economist Bruce Bartlett is quoted, saying that socialism means the public ownership of the means of production, something that Obama does not believe in; so it follows that he cannot possibly be a socialist.

It’s a stunningly naïve view, one that flows, I assume, from America’s lack of direct experience here. Yes, socialism can mean a belief in state ownership but that’s an increasingly old fashioned view, one abandoned by many European socialist parties, including the British Labour Party.

In 1995, on the initiative of Tony Blair, Labour revised Clause Four of its constitution, the original version of which committed it to common (i.e. state) ownership of the means of production and exchange. But it did not abandon socialism, oh no; for the new clause specifically mentioned, for the first time ever, that it was a “democratic socialist party.” Blair’s subsequent governments went on to prove just how ‘socialist’ they were by a massive intrusion of the state into so many areas of public and private life, most often in the form of one politically correct initiative after another.

You see, the modern version of socialism is not about production at all; it’s about control; it’s about the most abject forms of state worship. It literally strangles to death the lasses-faire spirit of free enterprise with ever greater levels of intrusion, ever greater levels of supervision by government or government-sponsored institutions. It owes less to Karl Marx and much more to the German sociologist Robert Michels, who in his book Political Parties introduced the world to the Iron Law of Oligarchy.

Now let’s turn to Obama’s America to see the Iron Law in operation, to see how state socialism is creeping through the system, a little like cancer. The country is being strangled in red tape and regulation. I was amused to read in the Economist that the Federal Railroad Administration insists all trains must be painted with a large “F” at the front. Why? That’s simple: so one can tell which end is which!

Far less amusing is the operation of the 2010 Dodd-Frank Law, a Gordian Knot that even Alexander the Great could not cut through. Adopted in the wake of the 2008 crash, it was designed to stop banks from taking excessive risks, allowing regulators to move in if required. At over eight hundred pages with added commentaries and ‘clarifications’ it’s a prodigiously complex piece of legislation which hardly anyone understands; but it’s there, blocking out the light, a mandate for further bureaucratic expansion.

This is just by way of example. It’s part of a wider trend of bureaucratisation that is such a marked feature of Obama World. Obama’s health care reforms make matters even worse, another jamboree for officialdom, regulation and complexity. It’s been estimated that for every hour treating a patient in the States another hour has to be spent on paperwork. It’s set to get far, far worse; for next year the number of federally mandated categories of illness and injury for which hospitals can claim reimbursement is set to increase from 18,000 to 140,000. Believe it or not this includes nine codes relating to injuries caused by parrots!

Here we live under the increasingly irksome diktats of the European Minotaur, living and regulating at the heart of the Brussels labyrinth. But America, at least hitherto, lived under a different political culture, one where people could generally breathe free. The air gets thinner by the day. A culture of free enterprise and initiative bit by bit is being replaced by an engorged state apparatus, by a belief that one can have a law, a regulation and a regulator for every eventuality. The Economist reports that regulations in general add an astonishing $10,585 in costs for every person in employment. As it says, it’s a wonder that the jobless total isn’t even higher.

So, yes, this is the practical application of a creeping form of socialism and oligarchy; this is why Obama stands at the top of an administration that goes against every principle on which the nation was built. The business of America is business, President Calvin Coolidge once said. Not any longer. Now the business of America is bureaucracy.
Posted by Anastasia F-B at 16:05