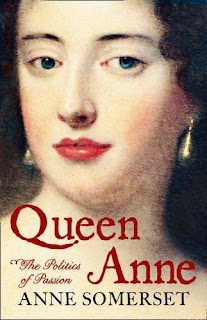 There are some lines from Rob Roy, an historical drama directed by Michael Caton-Jones, which are forever preserved in my mind. Set in Scotland during the reign of Queen Anne, the duke of Argyll laments to the duke of Montrose “would she had seen a child live to comfort the kingdom”. To this Montrose responds “One might have hoped that a field so often ploughed might have yielded one good crop. In truth, I have seen healthier graveyards than that woman's womb.”

Poor Queen Anne, that’s her own observation, not mine, pregnant at one moment, in mourning at the next. Altogether she had been expecting seventeen times in as many years, suffering numerous miscarriages; and when she did not miscarry her babies were stillborn. Two little girls did survive, only to be carried off by smallpox. William, duke of Gloucester, the only one to survive infancy, died at the age of eleven. She also suffered acutely from ill-health and was so fat that, at the time of her death in 1714 at the age of forty-nine, it took fourteen men to carry her coffin. As it passed her doctor observed “Sleep was never more welcome to a weary traveller than death was to her.”

There is a tendency to see this tragic Queen as a mere parenthesis between the age of William of Orange and the incoming Hanoverians. I’ve long thought it a mistake, a mistake that’s been splendidly corrected by Anne Somerset in Queen Anne: the Politics of Passion.

We tend to forget that Anne was not just the last of the Stuarts but in some ways the most successful. Her reign brought about the union of England and Scotland, thus avoiding a disputed succession. It was a matter in which the Queen herself took a close personal interest, seeing it as one of the great achievements of her reign, an enthusiasm not shared at the time in either England or Scotland. Her time also saw England emerge from long years of isolation and self-absorption as a European power, with the Duke of Marlborough winning a series of stunning victories against the French in the War of the Spanish Succession.

Anne, the younger daughter of James, duke of York and his first wife, Anne Hyde, was never expected to be Queen in the first place, which may account for the woeful neglect of her education. Lack of education was compounded by the fact that she wasn’t the brightest jewel in the royal crown, though she had sufficient reserves of native wit, which was to see her through the turbulent politics of the time.

Brought up as a Protestant on the insistence of Charles II, her uncle, her devotion to the Church of England explains why she was such an undutiful daughter, playing a key part in the overthrow of her Catholic father in the Glorious Revolution of 1688. Her place in the succession was then fixed by the Convention Parliament of 1689, coming after her older sister, Mary, and her husband William, if they should die heirless.

Somerset is scrupulously fair to her subject, writing with considerable insight and panache, but it is difficult to like, or indeed feel any kind of sympathy, for the morbidly self-pitying Anne. She could be narrow-minded and spiteful in the extreme, taking umbrage at the least of slights. She was particularly vengeful towards Mary Beatrice, her Catholic step-mother. Dropping one vendetta, she quickly picked up another, quarrelling with both Mary and William, whom she referred to as ‘the Dutch abortive.’

The one great friendship of her life was with the appalling Sarah Churchill, the wife of Marlborough, who took her up as a protégé and then misused her personal power ferociously. Now here I do feel a certain sympathy for Anne, subject to the whims and tantrums of the ambitious Sarah, which did not stop short of outright blackmail. Not only did she accuse Prince George of Denmark, Anne’s dullard husband to whom she was devoted, of having a homosexual liaison, a pure fabrication on her part, but, as the relationship soured, she even hinted that the Queen herself was a lesbian (a word that did not then exist), saying that she ‘indulged in some dark deeds at night’ with Abigail Masham, the lady-in-waiting who had supplanted her in the Queen’s affections.

It was Sarah, more than any other individual, who was to do so much to colour Anne’s posthumous reputation as the plaything of others. The one thing that she could never forgive her for was developing a personality of her own. It’s a wonder that the friendship endured so long, the Queen putting up with hectoring and lectures at regular intervals. Still, Anne could not afford to lose the services of Marlborough, as treacherous a political schemer as his wife, at the height of the war with France. That point came when he was winning England into potential bankruptcy.

Although political parties had still to coalesce, this was the age of faction, with the Whigs on the one side deeply suspicious of the Tories on the other. The author is particularly good on the eddies and flows of contemporary politics, waters full of the most treacherous reefs and rocks! Anne stayed above faction by and large, though her sympathies were for the Tories, which further infuriated Sarah, a relentless partisan for the Whigs.

So far as treachery is concerned, I knew about Marlborough’s correspondence with James Stuart, Anne’s Catholic half-brother and pretender to the throne, but Somerset’s revelation that he was even encouraging George, the Elector of Hanover, to mount a William of Orange style invasion of England to forestall a similar bid by the Jacobites was a complete surprise, a hard nugget of historical information that has been well buried.

The book contains some interesting and plausible conjectures. For example, Somerset suggests rhesus blood incompatibility as an explanation for Anne and George’s tragic reproductive history. It may very well be. It’s touching to note that as miscarriage followed hard upon miscarriage (there was one year she was pregnant three times) “sometimes they wept, sometimes they mourned…then sat silent hand in hand." When George died in October 1708, bringing to an end a quarter century of marriage, Anne was seen “kissing him at the very moment the breath went out of his body.”

As a biography Queen Anne; The Politics of Passion is a wholly commendable piece of work, which is bound to put this much neglected monarch in proper place, showing her to be dutiful and shrewd, notwithstanding her character defects. Where it falls down slightly is in a history of the times. There is a superabundance of quotes from Anne’s personal letters, while what is happening at large beyond a narrow court circle is notable by its absence. This was a time of great energy, of changing ideas and changing patterns of behaviour. Anne is certainly there but I would like to have known more about Anne’s England. Still, this is a good and enjoyable book from an author now well-versed in royal biography.
Posted by Anastasia F-B at 17:01