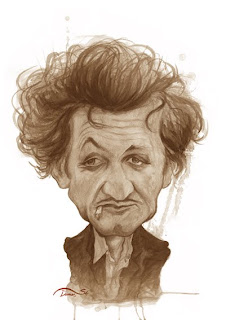 I admire Sean Penn; let me get that out of the way to begin with. There is much to admire in his work as an actor and director. I admired his performance as Sam Bicke in The Assassination of Richard Nixon. In review here I wrote;

Penn is truly superb in the part, totally different in every way from his usual onscreen character, at once diffident and subdued, at twice angry and explosive. Bicke is the kind of man who might make normal losers feel good about themselves: he is a failure in absolutely everything – in marriage, in business, in life itself. It’s certainly possible to feel sorry for him. In one scene he goes to visit his family only to visit the dog! But Bicke is such a hopeless case, unable to move on, unable to take charge of his life, constantly projecting his inadequacies on to others.

Sean is such a contrast in every conceivable way; no one could accuse him of inadequacy or failure; no one could possibly accuse him of being a hopeless case…or could they? Hang on just a moment, for I’m about to do just that. As a writer and analyst of political affairs he has taken on the guise of Bicke. Actually he’s gone that one step further: he doesn’t just come across as inadequate; he’s made himself look like a prattling poseur.

So what’s the occasion for this? Sadly for his reputation and self-esteem he decided to put Penn to paper, a piece published last week in the hyper-liberal Guardian, the mouth-piece of the English chattering classes, in which he laments the presence of Prince William in the Falklands (The Malvinas/Falklands: Diplomacy Interrupted, 23 February). Apparently it gives out a message of ‘intimidation.’ What he gives out is a message of laughable absurdity. What he gives out is a tendentious sermon tangled in atrocious prose. It reads as a kind of parody, presumably the sort of high-flown gibberish that he thought was just the thing for the Guardian.

This is not a cause of leftist flamboyance nor significantly a centuries-old literary dispute. But rather a modern one, that is perhaps unveiled most legitimately through the raconteurism of Patagonian fishermen.

As a result, we must look to the mutual recognition of this illusive paradigm by both countries.

The manifestation of the islands' names themselves betrays a vague history written by victors and viscounts.

Let's recap: the UK was indeed engaged in diplomatic resolution discussions with Argentina until the Argentinian (sic) people were themselves betrayed by their own leadership's diversion, and the UK's unfaltering support of a dictator who had live rats inserted into female genitalia and electric probes placed on the testicles of men in Chile simply because they had elected for a life, identity, and leadership of their own choosing.

I’m tempted to write LOL; oops, I have, though I really don’t care for internet slang. But, my goodness, one really does feel like laughing out loud over those victors, viscounts, raconteurs and illusive paradigms! I can almost excuse the dictator’s disgusting practices, seeing how Penn pushes live rats and electric probes into the recesses of the English language. In style the whole thing has a risible Adrian Mole quality. For once the Penn is assuredly not mightier than the sword.

The poor man; whatever serious point he is trying to make has been completely defeated by his own verbal and intellectual inadequacies. Oh, my goodness, it’s best for fools to stay quiet and keep people guessing than open their mouths and turn a doubt into a certainly. Please Sean stick to acting and leave the politics to the grown ups; leave the history to the victors and viscounts…and those Patagonian raconteurs.
Posted by Anastasia F-B at 15:33