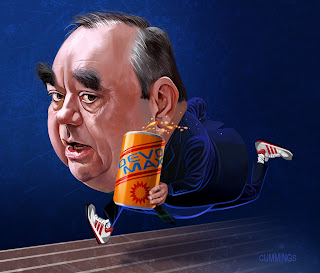 Scotland is to have a referendum on independence. Though no definite date has been set it is likely to be held in 2014, three years after the ruling Scottish National Party obtained a majority of seats in a devolved parliament that, according to Labour, would kill nationalism stone dead. Well, like every other prediction emerging from the benighted Labour Party, it has proved to be complete rubbish.

Why so late, you may wonder? Alex Salmond, leader of the Scottish National Party (SNP) and Scotland’s first minister, says that it has been delayed merely to ensure that it is ‘well-organised.’ Yes, sure, believe that it you like. It just so happens that 2014 is the seven hundredth anniversary of the Battle of Bannockburn, when the Scots led by King Robert Bruce defeated a larger English army, incompetently headed by Edward II.

I have little doubt it’s on a wave of national celebration, of unrestrained Braveheartism, that Salmond hopes will carry the good ship Independence, wandering fruitlessly for so many years, a little like The Flying Dutchman, at last home to port. He even proposes to extend the franchise to sixteen-year-olds, most of whom, I hazard, know next to nothing about politics and quite a lot about patriotic clichés, mythic spiders and what have you.

There is a bit of a risk here of course. The evidence suggests that the majority of Scots, that is those a tad older than sixteen, are not that keen on independence. Here he has the example of the Alternate Vote referendum like Macbeth’s dagger before him, a poll held last year which effectively killed ‘voting reform’, much beloved by the Liberal Democrats, stone dead.

So, instead of a simple yes no he wants a third option, something he calls ‘devolution max’, which would deepen the powers exercised in Scotland, really only leaving defence and foreign policy as whole kingdom responsibilities. The situation would then be akin to the Union of the Crowns, that phase in Anglo-Scottish relations between the accession of James I to the English throne in 1603 to the Act of Union of 1707, which combined both national parliaments.

The trouble for Salmond, a big fish in a little pond (his deputy is called Sturgeon!), is that any referendum would have to have the authority of the UK government or risk being declared unlawful. David Cameron, the Prime Minister, has concentrated the first minister’s thoughts here, saying he can have his race but only with the yes no horses. Expect more wrangling in the period leading up to 2014, political battles that may yet dwarf Bannockburn.

Meanwhile, the Labour Party, whose bone-headed barons long disgracefully treated Scotland as a kind of political fiefdom, is in a bit of a panic. If Scotland were cast free it would mean the end of their northern block vote, without which they are unlikely ever again to get a clear majority at Westminster. I can’t think of any better reason for Scottish independence. Oh, yes, I can: it would mean that taxes raised in England could actually be spent in England, rather than sent north in doles.

Please do not misunderstand me. I’m fond of Scotland; I have many close friends there. My parents have a cottage in the far north, a place where I’ve spent many enjoyable vacations, long and short. I could only wish that the Scots were fonder of the English, that they could lose a mindset cast so far in the past, cast, yea, even so far back as Bannockburn!

As a postscript I read that Tommy Sheridan, one time leader of the far-left Scottish Socialist Party, has been released from prison, a third of the way through his sentence for perjury. This seedy man was much given to Marxist sloganeering…and visiting Manchester sex clubs. Now the king of the swingers, sorry, make that commissar of the swingers, is free. He says he will soon be back in court, launching a fresh bid to overturn his conviction. Not only that but he will be fighting for an independent and socialist Scotland. I can just picture it – Alba as Albania, a bleak future indeed. The Scots might care to take heed of the fate of Hilaire Belloc’s Jim and always keep a-hold of nurse for fear of finding something worse.
Posted by Anastasia F-B at 15:48