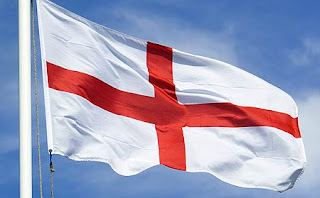 I now write for the English Standard (www.englishstandard.co), a new online paper designed to advance English views on English subjects, on the subject of England itself, a country that for too long dare not speak its name, though its Celtic neighbours more or less bawled theirs. To date I’ve contributed two articles, one on the poet Rupert Brooke and another on Sir Edward Hawke, the admiral who fought the Battle of Quiberon Bay during the Seven Year’s War, a naval victory over France that led to the ascent of Empire.

Here I am, spreading myself around: Ana the Imp, BrooWaha, My Telegraph (formerly), Boadicea’s Chariot (occasionally) and now the English Standard! It’s all good fun, no hardship at all. I love to write, to express my thoughts, my uniquely individual point of view, over any number of subjects, anything that attracts my eye, the ridiculous, the sublime and all points in between.

Anyway, ES is a fine venture, one that I’m happy to be associated with, flattered that I was invited to contribute. The editorial statement makes it clear that it’s about reclaiming English identity, too long submerged in collective notions of Britishness. It is, I suppose, anti-Union in purpose, in that the Union has served the interests of the Scots, the Welsh and the Irish Loyalists far more than it has served those of the English.

This is a subject I begin to think about more and more, though personally speaking I still retain some Unionist sympathies. I have a slight concern that if the United Kingdom dissolves into its constituent parts that we will be more vulnerable to the monstrous importunities of the European Union, an organisation that I have come to loath. Still the issue of identity politics presses on us ever harder, issues brought more sharply into focus by the last Labour government, conceivably the most treasonable in all of our history.

Three years ago I wrote an essay, again by invitation, to a site dedicated to a single question – what England means to me. In this I made the following points;

Yes, our present constitutional settlement is botched, badly thought-out and unfinished. It has raised more questions than it has answered, the question over England’s political sovereignty above all, our right to manage our own domestic affairs without outside interference, interference by those who are not English. Where does England fit in the devolved United Kingdom? I simply don’t know. There is, so far as I can tell, no great desire for a separate English parliament, but things cannot go on as they are indefinitely. It’s a house of cards which will fall, I believe, if we ever again have a Labour administration only kept in place by MPs from Scotland and Wales.

Britain is indeed a house of cards, though it gives me no pleasure to say so. People here are increasingly frustrated by the unanswered West Lothian Question, namely how long will we tolerate politicians coming from out-with England being able to interfere with our political affairs when we are unable to interfere with theirs?

This, like the Human Rights Act, mass immigration, the abandonment of ever more sovereignty to the European Union, the after effects of one ruinously expensive foreign war after another, is the legacy of the wholly vile Tony Blair. It’s rather ironic that this man, who seems to have no specific nationality at all, a cosmopolitan free-floater, has been indirectly responsible for a new English assertiveness. England made me; it’s an axiom that I no longer have any interest in denying. God bless the ES and all who sail in her!
Posted by Anastasia F-B at 15:33