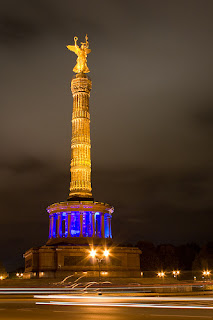 A question on Blog Catalogue about things to do in Berlin brought back my memories of the city. I’ve only been there once and it was a few years ago now. The Wall was gone, communism vanished and the city reunited. The old centre around the Reichstag seemed to be one huge building site. I shall have to go back soon – I have friends there – just to see how things are turning out, to see if the Bear has fully risen from the ashes like the Phoenix.

I enjoyed the time I spent; we seemed to pack in so much in just under a week. Even before I went I had visited the place in my imagination, helped along by the Berlin novels of Christopher Isherwood, the paintings of George Grosz and the theatrical collaborations of Kurt Weil and Bertholt Brecht. Cabaret, based on Isherwood’s stories, is one of my favourite films. I could just see myself as Sally Bowles!

Speaking of Sally, one of the evening spots we went to was the Bar Jeder Vernunft, where life is still a cabaret! This Art Nouveau mirror tent is really quite charming, all in wood and velvet, an imaginative recreation of the Kit Kat Club. We had a great evening sipping cocktails, listening to music and comedy, being divinely decadent and generally laid back. 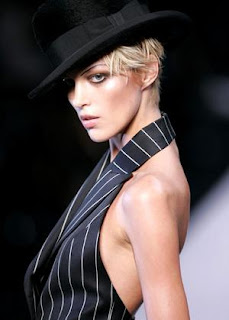 Ah, but decadence has moved on since the days of Sally Bowles. If you want to know just how far it’s moved on try visiting a night club by the name of Insomnia. This does not come with any personal recommendation on my part. Let me just say that I’m no prude and I’m not easily shocked, but it was a case of a quick in out because there was too much in out, if you take my meaning. If you are a girl do not go on your own.

Soberly, in the day, one of the first places we made for was Museum Island, specifically to see the Pergamon Altar in the museum of the same name. This originally formed part of the temple of Zeus in the Greek city of Pergamon. It really is quite something, the throne of Satan himself, at least according to some of those who take their cue from the Book of Revelations. I pass no comment on that. What I will say is that it inspired Albert Speer, who used it as a basis for the design of the Zeppelintribüne at Nuremberg, another satanic throne altogether.

Incidentally, the Altar was brought to Berlin from the then Ottoman Empire, where it was reconstructed at the beginning of the twentieth century. Given the dark history that was to ensue it could very well be seen as a harbinger of ill-omen, becoming a kind of gateway to hell.

And to the angel of the church in Pergamos write; These things saith he which hath the sharp sword with two edges; I know thy works, and where thou dwellest, even where Satan’s seat is: and thou holdest fast my name, and hast not denied my faith, even in those days wherein Antipas was my faithful martyr, who was slain among you, where Satan dwelleth. 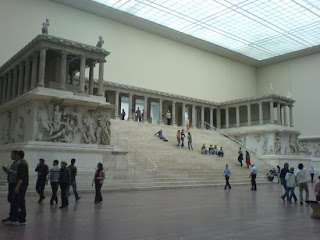 On a slightly lighter note I discovered that the Altar impressed not only Speer and Hitler but also – guess who? – Barack Obama! He visited the city in the summer of 2008, the year after me, and, in the hapless and ill-advised style that was to become typical of his ensuing presidency, used the design of the Alter as a backdrop to his Democratic acceptance speech.

Now the last thing this man needs is any more conspiracy theories but that is exactly what he engendered with the Lucifer-endorsed ‘Barapolis’ There are some on the outer fringes of American life, it has to be said, who now believe him to be Antichrist in person, poised in this portentous year to destroy the country. This is something he may very well do if he wins in November, but because he is stunningly incompetent chief executive, not because of any satanic power!

Never mind that; let me get back to Berlin. It’s not a particularly handsome city; it bears no comparison with Paris or Rome, and there still signs of its wartime trauma and subsequent long-term divorce into East and West. Ironically the one building to survive the war completely unscathed was Herman Goring’s Luftministerium, still standing in all its functional ugliness while older and nobler structures were consumed.

The other edifice that survived is the Siegessäule – Victory Column -, the triumphal phallus that celebrates the Prussian victories which led to the unification of Germany in the nineteenth century. It’s possible to climb to the top on the stairs inside the column. I did, and it’s a nice view over the city skyline.

There is another Obama reference here. Sorry, I simply can’t help myself. This man must have some really poor advisers, people with no sense of history or place, because it was used as the location for his Berlin speech, notwithstanding its militaristic and Nazi associations. Hmm, the Pergamon Altar and the Siegessäule; is he really trying to say something, trying to convey a subliminal message? Heil Obama! Expect to see him in Triumph of the Will before the end of the year.

There is more I could say about the places I went to and the things I saw, as well as the people I met. But one thing stands out, the night I dined in the Hotel Adlon. This was one of the places high on my ‘to do’ list. Situated on the Unter den Linden, it has a fascinating history. Sadly the original hotel, one of the most fashionable in Europe, was largely destroyed in May, 1945, set alight by drunken Soviet soldiers. In its inter-war glory days it saw the likes of Marlene Dietrich and Charlie Chaplin among its guests. Greta Garbo’s movie Grand Hotel was inspired by the Adlon. After the fall of the Wall construction of the new Adlon was begun in the late 1990s. The food was splendid and the ambience magical, as we sat and talked and dreamed of old, happy, far off things and glamour long ago. 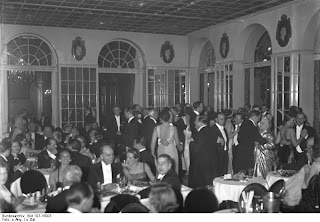