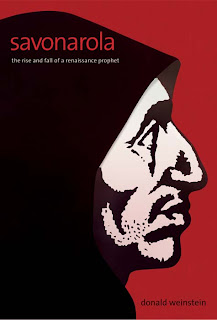 The stones of Florence are suffused in history. The traces of the past are everywhere, the traces of the Medici, from magnificent beginnings to a wretched and degenerate end. The traces are there, too, of Girolamo Savonarola, the Dominican friar who became, for a brief season, the avatar and prophet of the Florentine republic. I had a sense of him in his cell in the Convent of San Marco, where his eagle-beaked portrait hangs on the wall. I had a sense of him standing in the Piazza della Signoria, the site of his famous Bonfire of the Vanities, where he himself was consumed by a great bonfire in May, 1498.

He was an extraordinary figure, one of the meteors of history. He came seemingly as a prophet armed only to end as a prophet outcast. In a sense he was the Catholic Martin Luther, condemning the many abuses of the Church, particularly bad during the pontificate of the Borgia Pope Alexander VI, his nemesis. Florence was his celestial city, one that was destined to inherit the legacy of Classical Rome, reforming and renewing the purity of Catholic Christianity.

Born in Ferrara, Savonarola, full of messianic vision, came to Florence at just the right time. The sun of the Medici Renaissance was in eclipse. A new and terrifying disease had come to Italy with the invading French army of Charles VIII. Not yet known as syphilis, it was simply called the French pox. The half millennium was approaching, giving all the more force to Savonarola’s message of the Last Days. Florence was to be the New Jerusalem. Alas, in the end, by his own admission, he was a false prophet, no more than a ravening wolf. Or was he?

In Savonarola: the Rise and Fall of a Renaissance Prophet Donald Weinstein, an expert on the period, has compiled a meticulous and commendably objective biography. He has a fine eye for the man, the place and the times. He also has a talent for pithy and memorable phrases. Savonarola appealed to what he calls the ‘myth of Florence’, a city he mesmerised by his ‘charisma of grace.’

The book does an excellent job in tracing the evolution of the Dominican’s message, moving by stages from one of Christian renewal to outright millenarianism. With the army of Charles VIII, Savonarola’s ‘New Cyrus’, threatening the city, people were more and more willing to hear what God had in store for them. The Medici were exiled. The myth of Florence and the myth of Savonarola came, for a time, into perfect harmony. Cometh the hour, cometh the man.

The history of Florence, and the biography of Savonarola, in the years between 1494 and 1498 is worthy of a Shakespearean tragedy. It’s a complex tale of faction, counter-faction, intrigues, feuds and wars, the stuff of high Renaissance politics, a labyrinth through which the author spins a fine thread.

In his consistent determination to avoid bias Weinstein lays every fact before us, building his structure brick by brick. He makes it clear that Savonarola, contrary to appearances, was always a prophet unarmed (he was never the city republic’s political master). His power was one of persuasion, a message supported up by the coincidences of the times, the key to his initial success and his ultimate failure. It was his tragedy that he found a power within himself only to denounce it in the end, not only a result of torture but also of an acute loss of self-belief.

Sober and scholarly, Weinstein also has a talent for weaving a gripping story, full of the most memorable characters, all set against the background of papal politics, foreign invasion and Renaissance humanism. Savonarola treats the subject sympathetically, even with a degree of admiration, without falling into the dangers of complete seduction. I’ve certainly come to understand the man much better from a reading of this book, though any personal sympathy I have for him is arrested by the fact he is alleged, personally, to have consigned paintings by Sandro Botticelli to the Bonfire of the Vanities!

I love irony and I love anecdote, and the author also has a taste for both. For example, I was fascinated to discover that Charles VIII, upon whom Savonarola placed so much faith, died after banging his head on a doorframe the same day that the friar was arrested, a strange turn of fate, particularly fateful as the king was short so the door must have been even shorter!

This is a good story, lucid, meticulous and exhaustive. If you have any interest at all in biography, in history, in a fascinating life and in the even more fascinating canvas of Renaissance Italy I can assure you that there is no vanity in reading Savonarola.
Posted by Anastasia F-B at 15:56