The Dream of Pharaoh 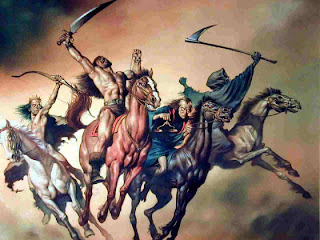 And I looked, and behold a pale horse: and his name that sat on him was Death, and Hell followed with him. And power was given unto them over the fourth part of the earth, to kill with sword, and with hunger, and with death, and with the beasts of the earth.

We have reached the end of days. It’s obvious, is it not, in this year of the Maya? The banking crisis, the euro crisis, war, famine and pestilence are all there; the calendar moves into its final phase. Public debt rises and national economies weaken under the burden. Anarchists occupy New York’s Wall Street; anarchists set up camp outside Saint Paul’s Cathedral in London. The veil has been lifted; all has been revealed; the apocalypse is here!

Actually, we’ve been here before, many times, in the great cycles of our history. There is a timely reminder in History Today by Tim Stanley that chaos and poverty are the historical norms of Western civilization, not peace and plenty. Bad times always appear uniquely bad to those living through them, but they are seldom as bad as all that, or we can at least comfort ourselves with worse examples. In previous ages millenarian sects would rise by the dozen in cataclysmic times, the flagellants would be wandering the streets, their backs all bloody. Now we just wring our hands while we watch the slow motion collapse of the euro!

Oddly enough some of the examples given by Stanley in his article seem understated, or rather it seems odd to me to set the German Peasant’s War, a great national tragedy, alongside the US Bank War of the 1830s, when then President Andrew Jackson took the kind of action that the present Wall Street shower could not even dream of! But, hey, where is the Black Death?!

He’s certainly more on key in highlighting the troubles of the Great Depression, which make our present banking crisis still something of a teddy bears’ picnic. Then there really was war and rumours of wars; then history entered one of its most malevolent cycles, the nadir of civilization. In my own period of special interest, England of the seventeenth century, the world was indeed turned upside down during the Civil Wars, many expecting the Second Coming daily.

It might be the delusion of democracy itself, which is arguably not the end of historical evolution, but merely a stage passing through, simply a chrysalis. Stanley quite rightly says that the end of the Cold War and the global sweep of democratic capitalism in the 1990s gave the impression that the struggle of history was over, a reverse Utopia from that anticipated by the Marxists. But democracy promised more than it could deliver; and in Russia it delivered chaos.

Now democracy is an inconvenience for the big battalions, as Robert Michels’ iron law of oligarchy takes definite hold in the European Union. Here government of the bureaucrats by the bureaucrats for the bureaucrats makes sure that meaningful democracy shall indeed perish from the earth, or the European part of it at least. Still, the end is not yet. Things might be bad but they could always be much, much worse. Let me rest and dream of the Maya. :-)
Posted by Anastasia F-B at 15:50